SEOUL, Sept. 4 (Yonhap) -- South Korea is pushing for a new law that will allow government support to be given to people living near military bases as a way to overcome public aversion to such facilities.

The move comes as residents of Seongju, 296 kilometers southeast of Seoul, rose up in protest after their rural county was tapped to host the Terminal High Altitude Area Defense (THAAD) battery in July.

Defense officials also said that the new measures take into account the difficulty experienced in the building of the Jeju naval base that took 23 years to construct in the face of stiff opposition from nearby residents.

The base, on the southern coast of the resort island, was first proposed in 1993 to forward deploy South Korean naval vessels to defend vital sea communication lanes. Work on the base was only completed in February of this year, with the facility also including infrastructure for cruise ships. 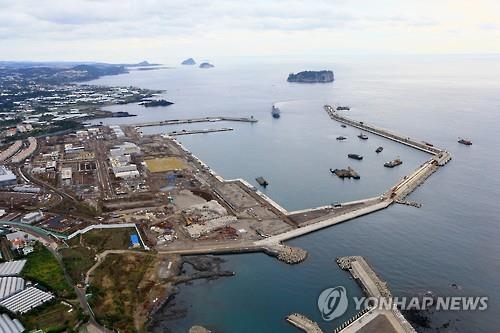 "At present there is no legal way for the government to compensate communities who may be adversely affected by military bases in their midst, which is in some way fueling the opposition," a defense ministry source said. "To deal with this problem the government is moving to hammer out a bill that can make it possible to offer effective benefits."

No details have been released, but insiders said the plan could outline what kind of assistance can be given and what areas near bases are eligible for getting benefits.

"Overseas data on various support offered will be used as a reference," he said, hinting information on how countries like Japan dealt with similar developments will be checked.

"The THAAD controversy brought home the importance of communicating with communities and the need to offer compensation for inconveniences that can occur."

The defense ministry said firing ranges, military airfields and munition storage depots will likely be included. It said areas near anti-aircraft missile batteries and radar sites may or may not get support.

Most areas to get support are close to facilities where there are lots of movement of troops and equipment.

"For radar bases in particular, once they are set up, they are not moved so they don't cause particular inconveniences to nearby residents," another military official said.

He added that while there are concerns of health risks involving radar pulses, such fears are groundless since radar is harmless as long as people don't enter the safety zone near such devices.

Options being considered are to give regional governments that host military facilities more central government monetary grants, as well as assisting in public infrastructure building projects. Such measures can directly improve the living standards of residents in the community.

Officials said that while people may still not welcome such facilities even if the support law is passed, there is a chance that decisions to build bases will be met with less resistance. This they said will create a better environment for troops stationed at such bases.

(LEAD) S. Korea pushing for law to give support to people living near military facilities

(LEAD) S. Korea pushing for law to give support to people living near military facilities