SEJONG, Sept. 4 (Yonhap) -- The government on Sunday said it will expand a task force to ensure there are no delays to the flow of cargo after the country's No. 1 container carrier Hanjin Shipping Co. went under court receivership.

On Friday, the world's seventh-largest shipper was put under receivership. A day earlier, it filed for court protection after its creditors, led by the state-run Korea Development Bank, rejected its self-restructuring plan.

Following the decision, the government set up a task force led by the Ministry of Oceans and Fisheries to deal with the aftermath.

On Sunday, the ministry said it decided to expand the governmentwide high-ranking task force with the participation of nine other related government ministries and agencies.

"The government plans to deal with this crisis so it does not lead to cargo chaos, which can affect exports, as well as impact the overall economy," Oceans and Fisheries Minister Kim Young-soek told reporters.

The new task force will work with related agencies to minimize the impact on ports and the shipping industry overall.

"The government asks related companies in the shipping and cargo industries to actively respond to the situation," said Kim, further calling on Hanjin Shipping to take full responsibility.

Hanjin Shipping said 68 ships out of 141 of its ships have been stranded at sea due to port entry denials in many countries.

In addition to ports in the United States, China, Japan, Singapore, and India, Malaysian and Italian authorities have denied the entry of Hanjin Shipping's vessels.

Hanjin Shipping said earlier one of its container vessels was already seized in Singapore by a creditor.

The country's maritime ministry said it will work to smooth out the flow of cargo for local exporters and importers by allocating substitute ships in place of Hanjin's vessels that may be seized.

Four Hyundai ships will replace Hanjin's American region fleet and nine other ships will be used on the European route, officials said. 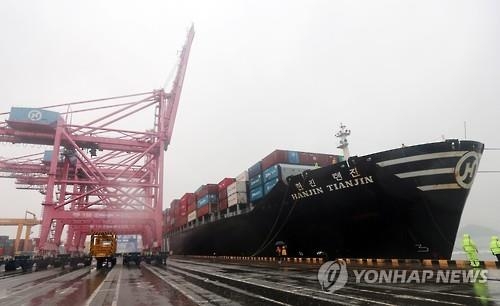