The two-day summit began Sunday under the main theme "Towards an Innovative, Invigorated, Interconnected and Inclusive World Economy." It brought together leaders of G-20 countries and international organizations, including the United Nations and International Monetary Fund.

The summit came amid growing concerns over uncertainties in the global market, fueled partially by Britain's shocking decision to quit the European Union, and the recrudescence of protectionist tendencies and isolationism.

Cheong Wa Dae said Park will make an appeal for "active" endeavors among G-20 countries to expand free, open trade and block the emergence of protectionism.

During the first G-20 session on Sunday, which is to explore new paths for global growth, Park plans to stress that her creative economy policy is a new innovative economic model, and that it is in tune with the main G-20 agenda for growth through innovation.

The president's signature "creative economy" drive aims to boost the economy by creating new business opportunities, industries and jobs through the fusion of cutting-edge technologies, culture and other opportunities.

Besides the growth agenda, the participants in the economic forum will also discuss a series of global challenges that affect the world economy, such as climate change, terrorism, health care and the continued influx of refugees into Europe from conflict-laden, poverty-stricken countries.

These issues will be discussed at the final session of the G-20 summit on Monday.

At the session, Park plans to share South Korea's efforts to support the global fight against climate change and call for the strengthening of the Green Climate Fund, a Seoul-based international agency to facilitate developing countries' adaptation to climate change.

Park's aides said that the president also plans to emphasize that the world can view climate change in a positive light and take it as a source of business opportunities. In this vein, she will explain South Korea's policy efforts to foster new energy industries that have come in tandem with the country's efforts to combat climate change, her aides said. 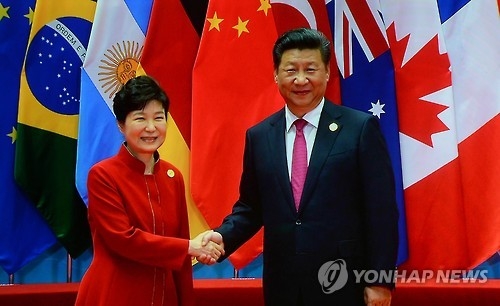