SEOUL, Sept. 4 (Yonhap) -- The number of Galaxy Note 7 phablet users visiting customer service centers doubled on the first weekend since Samsung Electronics Co. announced its global recall, but there was almost no one who opted to return their devices, company sources said Sunday.

According to one Samsung official, the company's Jongno service center, the largest in the northern part of Seoul, had 51 Galaxy Note 7 users visiting on Saturday alone, compared to around 25 such customers normally. They stopped by to check the safety of their batteries which can be carried out by engineers.

Samsung on Friday announced an unprecedented move to recall all phablets sold after several devices caught fire while being charged. It said its probe has found that the fire was caused by faulty battery cells, but the Jongno service center didn't report any Note 7s with this problem over the weekend.

Another Samsung official said the same service center had about 30 customers visit by 3 p.m. Sunday. The official added it was difficult to compare that figure with the past data because these customer centers don't usually open on Sundays. 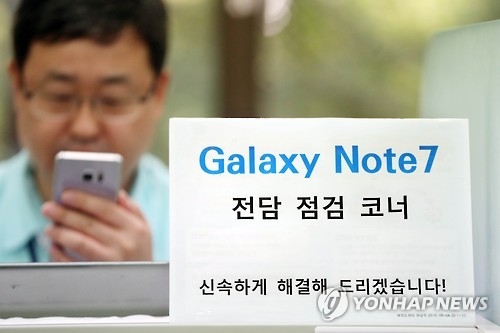 In contrast, dealerships for the mobile carriers -- SK Telecom Co., KT Corp. and LG Uplus Corp. -- weren't nearly as crowded on the weekend. Observers say it indicates while some phablet users may be concerned about reports of fire, they aren't yet about to exchange them for other device or give up their phones at present.

Samsung's customer centers can only check the products, but users must visit these dealerships to exchange them.

"Some customers inquired about canceling their contracts, but there seems to be not too many people that have actually went ahead and done it," said an official with one of the carriers.

An insider from another company said: "There was some initial impact from the recall, but it didn't cause any chaos."

Samsung pledged it will replace all Galaxy Note 7 handsets sold at home and abroad with new ones, regardless of the date of the purchase. It claimed only 24 of the 1 million devices have been found with the faulty battery.

At least one South Korean user was added to that tally Sunday. The unidentified person uploaded a photo of a burnt Galaxy Note 7 phablet on an online community around 8 p.m. Saturday, saying the set had caught fire at about 4 a.m. the same day on a bedside table. The person who uploaded the photo claimed he sustained minor injuries. 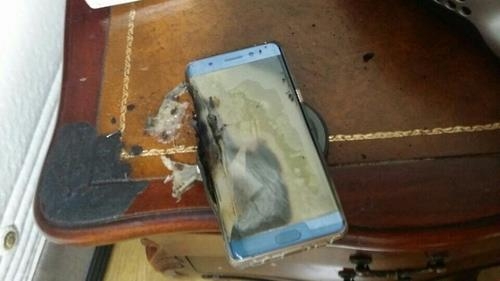