SEOUL, Sept. 4 (Yonhap) -- North Korea on Sunday called on its young citizens to pledge allegiance to the country's leader amid signs that international sanctions are starting to affect the reclusive country's social cohesion.

The country's main daily the Rodong Sinmun said in a political article that the Kimilsungist-Kimjongilist Youth League is second only in size to the ruling Workers' Party of Korea (WPK), and that North Korea's leader Kim Jong-un considers the country's youths as being an extension of himself.

It claimed that the league's congress held last month was like a "nuclear explosion" that put a halt to efforts by U.S. imperialists and their supporters to escalate tension on the Korean Peninsula. The paper also said that efforts by the international community to sanction North Korea for its fourth nuclear test and the launching of a long-range missile has effectively become useless. 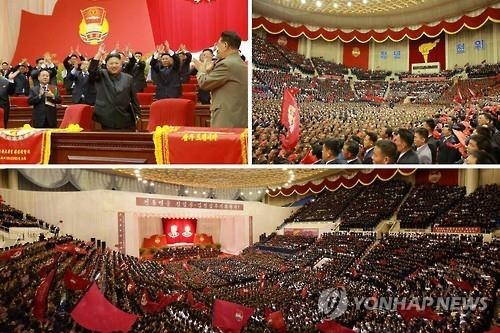 The congress held in Pyongyang on Aug. 26 was the first of its kind since February 1993. In North Korea, all those between the ages of 14 to 30 are required to join the organization which was formally known as the Kim Il Sung Socialist Youth League.

The Rodong Sinmun then emphasized that in Kim Jong-un's heart lies the youths and military of the country.

North Korean watchers in Seoul said that the call for obedience comes as sanctions imposed by the United Nations are starting to bite, with many leading members of society defecting to South Korea.

Earlier this year, the North Korean staff of a restaurant in China defected en masse to the South, while in July, the No. 2 diplomat at North Korea's London embassy escaped to South Korea with his family.

"Such an exodus by well-to-do members of society is a sign of the weakening of government control," an expert claimed, adding that demanding greater loyalty from youths may be a move by the Pyongyang regime to bolster up its support base.