SEOUL, Sept. 4 (Yonhap) -- The nation's top baseball league surpassed 7 million in attendance for the ongoing season on Sunday, despite the cloud of match fixing.

It marked the second straight season in which the KBO attendance went over 7 million, and the third time overall.

The 10 KBO teams are expected to shatter the single-season record of 7.36 million set last year. It took 690 games in 2015 to reach the 7 million plateau.

The KBO is on pace for some 8.3 million fans by the season's end.

A potentially damaging match-fixing scandal, which emerged in July and resulted in a suspended jail term for one of the implicated players, hasn't discouraged fans from flocking to the ballparks.

The Doosan Bears, the 2015 champions running away with the pennant this year, have been the most successful team at the gate. They became the first club this season to reach 1 million fans on Friday and have had 1.04 million fans at Jamsil Stadium in Seoul so far.

The Nexen Heroes and the Samsung Lions moved into bigger stadiums this season, contributing to the uptick in the league attendance. Both clubs have attracted just over 710,000 fans, some 200,000 more than their totals from 2015.

Each of the 10 clubs has enjoyed an annual increase in attendance. 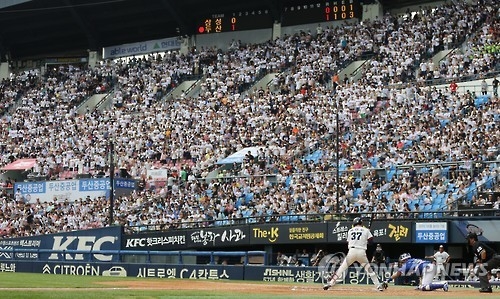 Baseball league surpasses 7 mln in attendance, closes in on record

Baseball league surpasses 7 mln in attendance, closes in on record