HANGZHOU, China, Sept. 4 (Yonhap) -- President Park Geun-hye on Sunday called on Britain to work together to ward off protectionist tendencies and promote free trade during her summit with British Prime Minister Theresa May.

On the sidelines of the summit of the Group of 20 leading economies in Hangzhou, eastern China, Park and May held their first talks to discuss a series of issues, including the global economy in the wake of Britain's decision in June to quit the European Union (EU).

May said that her government would strive to ensure that Britain's departure from the EU will proceed as smoothly as possible, and that her country will maintain strong and close ties with the world, including South Korea, according to Park's office Cheong Wa Dae.

During the summit, Park also expressed her appreciation for Britain's cooperation in the adoption of U.N. Security Council (UNSC) sanctions on North Korea and statements condemning the communist regime's provocative acts. Britain is one of the five veto-wielding UNSC members.

The latest set of UNSC sanctions, the toughest one to date, was adopted in March in response to Pyongyang's nuclear test in January and long-range rocket launch the following month.

During the summit, May called the North Korean issue a global threat and pledged to actively join international efforts to address North Korea-related issues. 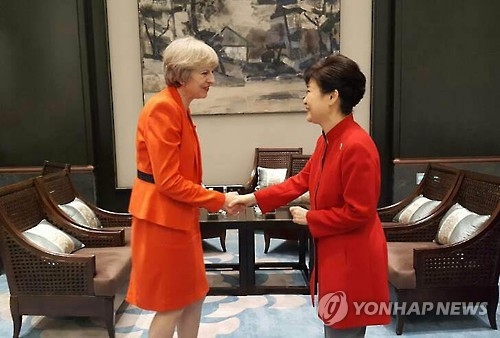