SEOUL, Sept. 5 (Yonhap) -- South Korea will try to get their second straight win in the final World Cup qualifying campaign as they face "homeless" Syria on the road.

South Korea, ranked 48th in the latest FIFA world rankings, will take on No. 105 Syria at Paroi Stadium in Seremban, Malaysia, on Tuesday for their second match in the final Asian qualifying round for the 2018 FIFA World Cup. Syria are the match hosts, but they can't stage World Cup qualifiers in their country due to the ongoing civil war.

South Korea and Syria were originally supposed to play in Lebanon, but the match venue was later changed to Macau due to security reasons. However, just six days before match day, Macau told the Asian Football Confederation (AFC) that it couldn't host the match. The AFC and the Syrian Football Association then decided to hold the match in Malaysia.

South Korea, looking for its ninth consecutive World Cup appearance, opened their final round with a nail-biting 3-2 victory against China on Thursday, nearly blowing a three-goal lead at Seoul World Cup Stadium. Syria, meanwhile, suffered a 1-0 loss to Uzbekistan in their opener.

South Korea are currently in second place in Group A, trailing Iran -- which beat Qatar 2-0 -- on goal differential. Syria sit in fifth place in the six-team group.

For the final Asian qualification, where 12 teams compete, the winner and runner-up of each group will earn their berths at the World Cup. The two third-place teams will have to go through play-off rounds to book their tickets to Russia.

South Korea lead in the head-to-head record against Syria with three wins, two draws and one loss. Their only defeat came in 1984, when they lost 1-0 at the Asian Cup in Singapore.

The two sides last met in 2010 in a friendly match in the United Arab Emirates. FC Augsburg forward Ji Dong-won scored the only goal in South Korea's 1-0 victory.

Although South Korea are considered the favorites to win the match, head coach Uli Stielike will emphasize the need to avoid making mistakes and concentrate until the final whistle. Against China, South Korea gave up two goals in a three-minute span in the second half -- one of which resulted from a defender's poor clearance -- and made things difficult for themselves.

Since Syria are expected to play with a dogged defense and counterattacks, South Korea are likely to push forward more aggressively than against China. Since arriving in Malaysia on Saturday, South Korea have been working on speedy and direct attacks.

Against Syria, South Korea will be without wing forward Son Heung-min, who returned to his English Premier League club under a previous agreement between the Korea Football Association and Tottenham Hotspur. Stielike selected Seongnam FC striker Hwang Ui-jo to fill Son's void.

South Korea, however, still have their star players from the European league, and they all performed well last week against China.

Ji picked up two assists, including on a header that led to a Chinese player's own goal, and his Augsburg teammate Koo Ja-cheol and Crystal Palace winger Lee Chung-yong scored a goal apiece. Team captain Ki Sung-yueng, an anchorman for Swansea City, showed a 96.23 percent pass success rate against China, the best for both teams.

The 20-year-old forward Hwang Hee-chan, who made his international debut against China, and midfielders Lee Jae-sung and Jung Woo-young could also have more playing time on the pitch as they will have plenty of energy. All three of them played against China as second-half substitutes.

In addition to reducing their mistakes, South Korean defenders should be aware of Syrian forward Omar Khribin. The 22-year-old went silent against Uzbekistan on Thursday, but during the second-round qualifiers, he netted seven goals. He has so far scored 13 goals in 28 matches for Syria.

Syria coach Ayman Al Hakeem will also rely on team captain and midfielder Abdelrazaq Al-Hussain, who has 12 goals in 54 matches. 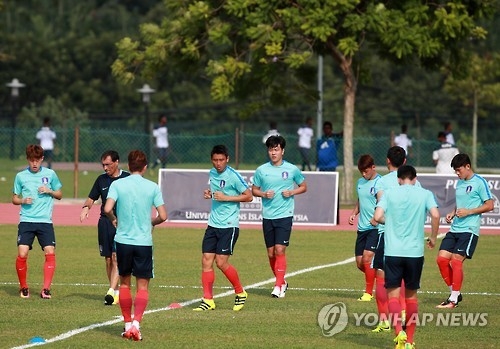