SEOUL, Sept. 5 (Yonhap) -- The St. Louis Cardinals' Oh Seung-hwan has picked up his 15th save of the season, helping the club end a mini-slide in the process.

Oh threw a scoreless ninth inning against the Cincinnati Reds at Great American Ball Park in Cincinnati on Sunday (local time), preserving a 5-2 victory and snapping the Cards' losing streak at three games.

It was the right-hander's first appearance since giving up a walk-off single to the Reds' Eugenio Suarez in the bottom of the ninth on Friday.

Oh gave up a leadoff single to Adam Duvall but struck out the next two men: Tyler Holt and Zack Cozart. Then Joey Votto, the Reds' best hitter, swung on the first pitch fastball and flied out to left field.

At 71-64, the Cardinals hold a 1.5-game lead over the New York Mets for the second wild-card spot in the National League.

In the American League, slumping Baltimore Orioles outfielder Kim Hyun-soo was benched in the club's 5-2 loss to the New York Yankees at home.

The left-handed hitting Kim usually sits against southpaws and gets the nod against right-handers. But having gone just 2-for-15 in his last five games, Kim didn't start against the Yankees right-hander Michael Pineda.

The Orioles' two-game winning streak was snapped, and they remained in third place in the AL East behind the Toronto Blue Jays and the Boston Red Sox. 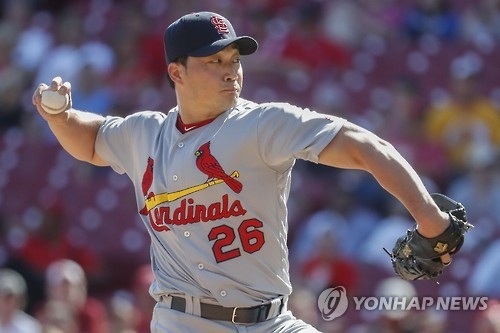 Elsewhere, Lee Dae-ho of the Seattle Mariners failed to produce a hit as a pinch-hitter against the Los Angeles Angels.

Lee, a platoon player at first base with left-handed hitter Adam Lind, came off the bench in the ninth when the Mariners were trailing 4-2 at Safeco Field in Seattle. With two outs and the bases empty, the South Korean slugger faced right-hander Andrew Bailey, but he grounded out to shortstop.

The Angels' South Korean player Choi Ji-man didn't play against the Mariners. The 25-year-old, who can play both first base and outfield, has yet to play a game since he was recalled from the Triple-A Salt Lake on Saturday.