The market for canned meat products, such as ham and sausage, reached nearly 1.24 trillion won (US$1.11 billion) last year, a 12.4 percent expansion from 2013, according to tallies from the Ministry of Agriculture, Food and Rural Affairs and the Korea Agro-Fisheries & Food Trade Corp.

Sales grew 6.6 percent to 349.5 billion won in the first quarter of this year alone, compared with the same quarter last year. This is a 21.9 percent increase from the same period two years ago. 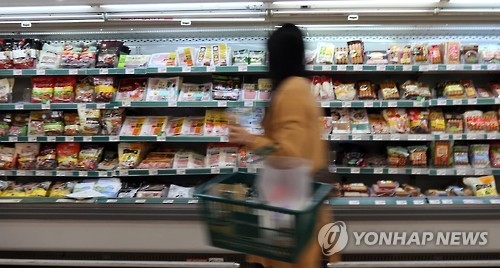 Ham was the most popular of the products, accounting for 58 percent of the sales, the tallies showed.

Industry officials say such increases reflect consumers' eating habits becoming more Westernized, which has increased their intake of meats. A recent study from the National Agricultural Cooperative Federation said meat consumption per person last year was 47.6 kilograms, a ninefold jump over the past 50 years. During the same time, consumption of rice dropped 54 percent to 62.8 kg.

Manufacturers expected more sales growth for the Chuseok (harvest moon) holiday next week, one of the peak periods for gift packages as millions of people go to their hometowns for family gatherings. A set of canned meats is one of the most popular items for the season, and the sales are likely to increase this year as a result of the anticorruption law that limits the price of gifts that can be given to government officials, teachers and journalists.

Industry leader CJ Cheiljedang said it has increased its stock of ham gift sets by 20 percent for this year's Chuseok holiday, expecting to set a new record on the same level of sales increase from last year.
(END)