During the summit on the sidelines of an economic forum in China's eastern city of Hangzhou, Park repeated that the need for a Terminal High-Altitude Area Defense (THAAD) system on the Korean Peninsula will disappear if North Korea's nuclear and missile threats are removed. She added that THAAD would only be aimed at the North and poses no threat to other countries.

The president also voiced hopes that the THAAD issue will be discussed in a "constructive and comprehensive" manner through communication among Seoul, Beijing and Washington, Kim Kyou-hyun, senior presidential secretary for foreign affairs, told reporters.

According to China's state-run Xinhua News Agency, Xi reiterated his opposition to THAAD, arguing that "mishandling the issue is not conducive to strategic stability in the region and could intensify disputes."

Held on the margins of the summit of the Group of 20 leading economies, the bilateral talks, the eighth between Park and Xi, were conducted amid friction between Seoul and Beijing over THAAD, a core element of America's global missile defense program.

"THAAD is a tool designed only to respond to North Korea's nuclear and missile (threats), and there is no reason why THAAD should encroach upon the security interests of a third country and there is no need for that either," she was quoted by Kim as saying during the summit.

"Following the North's firing of the Musudan missile and the submarine-launched ballistic missile, threats that our people feel is at an unprecedented level, and it is different from the level of threats China may feel," she added.

Park, then, underscored the need to continue dialogue to enhance "mutual understanding" through various bilateral channels.

"As the two sides have already exchanged their views on the THAAD deployment, Park explained Seoul's stance over why it has to take the self-defense measure in light of the gravity and urgency of the North's nuclear threats," the presidential aide told reporters.

Kim added that based on the shared understanding that the development of the bilateral relationship is a "historical trend," the two leaders held "candid" talks.

At the summit, Xi reaffirmed Beijing's "firm" stance in favor of the denuclearization of the peninsula, and peace and stability on it, Kim explained.

The sanctions were adopted in March in response to Pyongyang's nuclear test in January and long-range missile launch the following month.

During her opening remarks, Park called Pyongyang's continued provocations a challenge to relations between Seoul and Beijing, voicing her hope for the two sides to turn the situation into an opportunity to further strengthen their bilateral relationship.

"This year, the North conducted a fourth nuclear test and a ballistic missile provocation, which has seriously undermined peace in this region and posed a challenge to the development of the South Korea-China relations," she said at the summit. 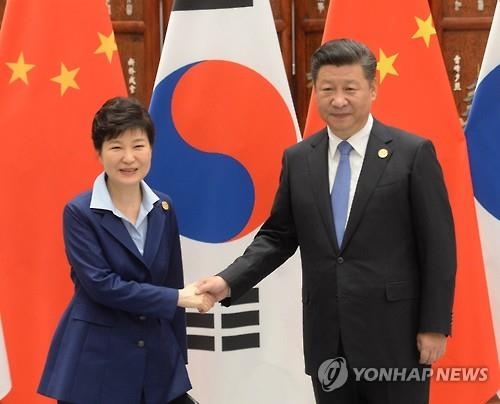