Outbound shipments of solar panels and other related equipment came to US$2.01 billion in the January-July period, jumping 46.7 percent from the same period last year, according to the Ministry of Trade, Industry and Energy. 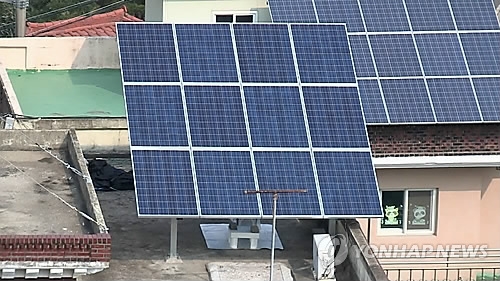 Exports of energy storage systems (ESS) have also reached $163 million in the seven-month period, accounting for 87 percent of the total for the entire 2015 fiscal year.

"Growing exports by the energy sector are especially inspiring in that such increases come amid difficult conditions facing the country's overall exports," Vice Trade Minister Woo Tae-hee said in a Seoul meeting of officials and business representatives.

South Korea's exports had dropped for 19 consecutive months since the start of 2015 before posting a 2.6 percent on-year gain last month.

Growing demands for clean and renewable energy were also apparent in the local market, whose solar power capacity increased by 1 gigawatt in 2015 alone, making it the world's seventh-largest market for solar energy with an overall capacity of 3.5 gigawatts, according to the ministry.

Such an increase came as the government began allowing resale of power generated or stored by local consumers in late 2014.

In the first six months of the year, the number of people taking part in the resale program jumped 67 percent on-year to 1,970 while the amount of energy saved also spiked 75 percent to 3.27 million kilowatts.

The government believes the country's clean energy exports will continue to expand in the future as the country is pushing to further develop new technologies and products as a new growth engine, as well as a way of its own greenhouse gas emissions.
(END)