SEOUL, Sept. 5 (Yonhap) -- Korean disaster flick "Tunnel" has claimed the top spot at the box office for the fourth weekend in a row, data showed Monday.

According to the official box office tally from the Korean Film Council (KOFIC), a state agency for promoting homegrown films, the movie added 344,332 to its domestic total of 6,942,566 over Sept. 2-4.

Starring Ha Jung-woo, Bae Doona and Oh Dal-su, the film has topped the daily box office chart for 26 straight days, the longest period for any film that opened this year.

It surpassed the 6 million mark on Aug. 27, the 18th day of running, becoming the sixth film that reached the milestone this year in the country. The film is soon expected to hit the 7 million barrier.

Directed by Kim Seong-hun, the film portrays the desperate struggle of a car salesman who accidentally gets trapped inside a collapsed tunnel on his way home from work. His wife and the rescue team captain make every effort to save him but are confronted with politicians and people who do not want a development plan to be delayed to rescue a single person who may have already died.

The Hollywood action film "Mechanic: Resurrection" came next with 273,928 viewers.

The James Wan-produced American horror film "Lights Out" dropped to No. 3 on its second weekend with 240,919 moviegoers. 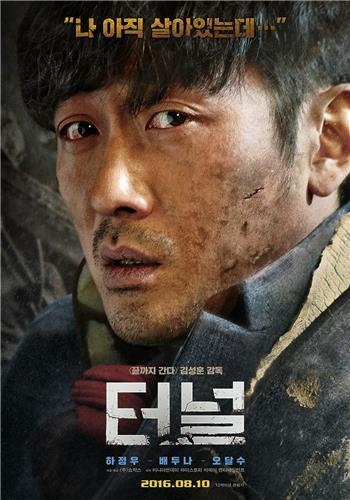