The nation's leading container shipping line filed for court receivership last week, succumbing to mounting debts amid an industry-wide slump. Many of the company's operations have since been crippled, with a number of foreign ports denying entry to Hanjin's ships.

Yim Jong-yong, chairman of the Financial Services Commission (FSS), described the handling of the freight stranded at sea as the "most urgent and difficult" issue for now. 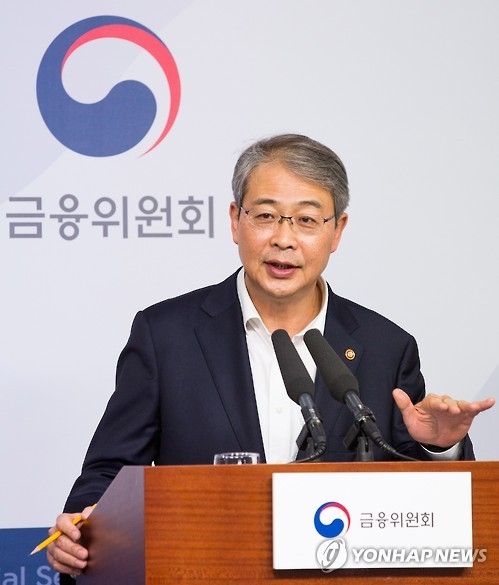 "That is the Hanjin Group's problem," he emphasized in a monthly press briefing. "The Hanjin Group and majority shareholders should take social responsibility and resolve it."

Hanjin Shipping is still an affiliate of Hanjin Group, the 10th largest conglomerate in South Korea, and the shipper's largest shareholder Korean Air Lines belongs to the group, Yim pointed out.

With regard to the fate of the shipper and allegations of its asset concealment, Yim noted it's a call by the court, not the government or creditors.

"What's most desirable, of course, is for Hanjin Shipping to revive itself. But many experts' view is that the possibility is low," he said.

If it's liquidated, the government's role is to minimize the impact to South Korea's shipping industry, he said, adding in that sense, the government hopes that another local shipping line Hyundai Merchant Marine will acquire some of Hanjin's assets including its ships, workforce and overseas networks.

The government will continue to deal with the Hanjin matter in line with its principles for the restructuring of the industry, he said.

He also announced plans for extending financial support for the contractors of Hanjin Shipping, saying some funds from the newly-allocated supplementary budgets will be used to help those firms, especially small and medium-sized ones with relatively good financial health.

Hanjin Shipping has a total of 457 contractors here and it owes them a total of around 64 billion won (US$57 million).

South Korea's two policy lenders -- the Korea Development Bank and the Industrial Bank of Korea -- will roll over maturing loans to some of the companies and provide special credit guarantee, Yim said. 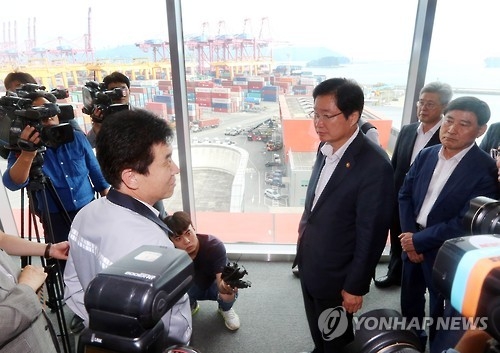 On the household debt problem, the top financial regulator said the related authorities will "faithfully and speedily" implement the package of inter-agency measures announced on Aug. 25 that revolve around the control of new apartment supply to reduce mortgage loans.

There has been widespread skepticism over the effectiveness of the planned measures with housing prices continuing to soar even after the announcement.

The related authorities, Yim said, refrained from taking significant action this time against the demand of houses out of concerns that a rapid slowdown in the housing market will deal a serious blow to not only the construction sector but also the soundness of household debts.

Household credit jumped 11.1 percent on-year to an all-time high of 1,257.3 trillion won as of end-June amid prolonged low interest rates and strong demand for new apartments, according to official data.