SEREMBAN, Malaysia, Sept. 5 (Yonhap) -- South Korea football head coach Uli Stielike said Monday he remained confident of a victory against what he expects will be an "aggressive" Syria in the upcoming World Cup qualifier.

South Korea will take on Syria at Paroi Stadium in Seremban, Malaysia, at 8 p.m. Tuesday (local time) for their second match in the final Asian qualifying round for the 2018 FIFA World Cup. Syria are the match hosts, but they can't stage World Cup qualifiers in their country due to the ongoing civil war.

South Korea are looking for their second straight win in the final round after edging China 3-2 at home on Thursday. Stielike said the players should have learned from the match against China and will display a better performance when they meet Syria.

"Against China, we played a good game until the 70th minute," Stielike said. "I hope our players can show that kind of performance against Syria."

The German coach added that he doesn't think Syria will just sit back and defend, saying that the Middle East side plays more aggressive football than China.

"I think we're going to have a fiercer battle than we had against China," he said. "Syria had 48 percent of ball possession against Uzbekistan in their opener. China only had 38 percent."

Stielike said South Korea will play with a greater focus on direct attacking. He claimed that the players in the European leagues, such as Ki Sung-yueng, Koo Ja-cheol and Lee Chung-yong, have recovered their best form after playing against China and will play a good game.

"In order to play 'direct football' you need a good movement from the players, while accuracy and speed of the passes are critical," he said. "Fortunately, we have many players who are capable of doing that."

Stielike said the Taeguk Warriors have no problem playing in Malaysia as weather and pitch conditions will be same for both teams. The 61-year-old coach added although Syria are not easy opponents, they will play with full confidence.

"Besides two losses against Japan, Syria collected six wins in the second round and they also scored some goals," he said. "There are a few attackers that we should be aware of, but we should be able to defend them if we have prepared for the match well."

Full back Oh Jae-suk said that the players are determined to show their best performance and will not let their guards down against Syria.

"This match is neither home nor away match for us, but we are going to play like it is our match at home," he said.

Oh is predominantly a right back, but he played on the left side in his international debut against China. The 26-year-old, however, was criticized heavily for his poor clearance that directly led to China's first goal on Thursday.

Oh, who plays with Japanese club Gamba Osaka, said he is ready to play better than he did against China if he gets an opportunity.

"I've experienced the pressure and the atmosphere of the final round qualifying through the match against China," he said. "If I can play against Syria, I will try my best to satisfy our fans." 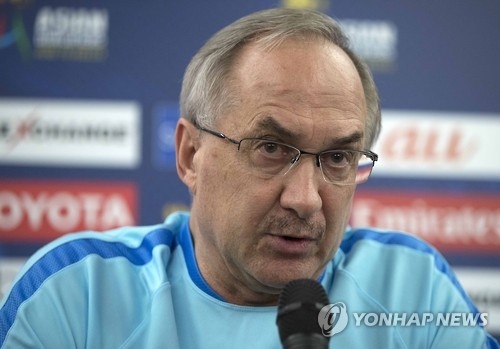