SEOUL, Sept. 5 (Yonhap) -- South Korea's conservative Saenuri Party on Monday made an appeasement gesture to the progressive-leaning southwestern Honam region, claiming the party is open to establishing closer ties in the political realm.

"I would like to make an apology to (the Honam people) for any wrongdoings made by the party, as well as its predecessors, for discrimination and hurting the dignity of the people of the region, both intentionally and inadvertently," Lee Jung-hyun, who heads Saenuri, said during a parliamentary speech. 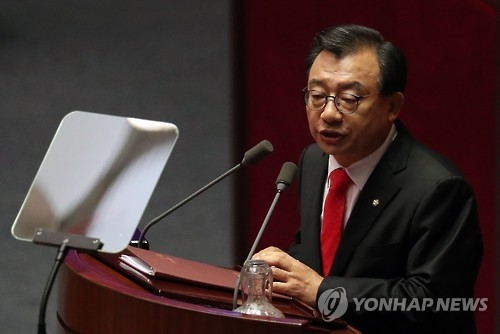 "Honam is not a progressive, aggressive or radical area. It is not owned by a single party," Lee said, adding Saenuri wishes to reconcile with the residents of the area.

On the controversial deployment of a U.S. antimissile defense system, Lee said opposition parties must make efforts to expand cooperation for the greater cause.

"It is regrettable that some politicians are abusing security issues to divide up the public, amid the continuing nuclear provocations and launch of submarine-launched ballistic missiles by North Korea," Lee said.

"I hope opposition parties will make a new tradition in which they expand cooperation on nationally crucial issues like the deployment of the Terminal High Altitude Area Defense (THAAD) system and cyberterrorism," he added.

Lee added the party would also like to propose making a special commission that looks back on the 70-year history of the National Assembly to make innovative reforms.