SEOUL, Sept. 5 (Yonhap) -- The government announced a set of measures Monday to tackle the nation's chronic low birthrate and to identify the "blind spots" in the state welfare system next year.

The Ministry of Welfare and Health and three other ministries announced the allocated budget in 2017 aimed at stabilizing public livelihoods.

Under the measures, the government is first set to increase state housing support for newly married couples as part of efforts to increase the number of newborns.

The government will build an additional 10,000 apartment units exclusively for newlyweds across the country, increasing the total to 48,000, and provide another 2,000 units to rent below the market price.

South Korea has one of the lowest birthrates among the Organization for Economic Cooperation and Development members, stoking concerns that it could cripple the country's growth potential and possibly result in more welfare expenses.

The government will also provide subsidies for infertility treatments to couples from all income brackets starting next year.

Medical costs for infertility treatment had so far been covered by national health insurance only to couples with low income. In order to qualify for the subsidy, a couple had to earn less than 150 percent of the national average monthly income.

The ministry said medical costs for infertility treatments, including three sets of artificial insemination and a maximum of four sets of external fertilization, will be covered by the national health insurance starting next year.

In order to help families with children, the government said it will increase the subsidies to households with fathers taking parental leave from the current 1.5 million won to 2 million won per month.

Also, the government plans to increase the number of both state and private day care centers.

The government will also enforce measures to root out child abuse after a series of high-profile cases involving violence against children made headlines.

Up to 60,000 people will be hired to assist children outside of their schools and build a stronger system to prevent further child abuse cases.

The government is also seeking to create a "welfare hub" through which it can provide tailored welfare services to those in need of them.

First, the government will hire an additional 1,623 public officials next year to handle the social welfare system.

The government will also create an additional 50,000 new jobs for seniors and increase payrolls for those in low-income brackets.

As part of efforts to lower the high youth unemployment, the government will expand support for those launching startups in new promising sectors, such as big data and the Internet of Things (IoT). 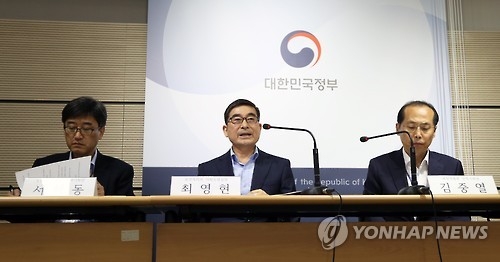 Gov't to expand support to stabilize livelihoods in 2017

Gov't to expand support to stabilize livelihoods in 2017