SEOUL, Sept. 5 (Yonhap) -- A senior executive of retail giant Lotte was summoned Monday as prosecutors accelerated their investigation into the embattled conglomerate after one of its executives was found dead in an apparent suicide late last month.

So Jin-sei, a close aide of the group chairman Shin Dong-bin and executive in charge of external affairs, was called in by the Seoul Central District Prosecutors' Office as a suspect on charges of breach of trust.

In mid-August, prosecutors summoned So to gain insight into the investigation, but his status has changed to that of a suspect as they collected more circumstantial evidence against the executive.

Prosecutors suspect the 66-year-old committed irregularities in the process of increasing the capital of one of Lotte's affiliates by issuing new stocks between 2010 and 2015.

The investigators said they will also question So over his involvement in the group's alleged wrongdoings, including tax evasion and creation of slush funds. The prosecution has been looking into the group since June, after launching full-fledged raids on its headquarters and affiliates.

Entering the prosecutors' office, So denied the allegations raised against him.

Lotte, which has sprawling businesses in both South Korea and Japan, has been gripped by a series of scandals since last year, including a bitter feud between Shin Dong-bin and his older brother for managerial control.

The prolonged family feud virtually came to an end after the founder's second son and incumbent chief won shareholder support in March to tighten his grip on the business group. 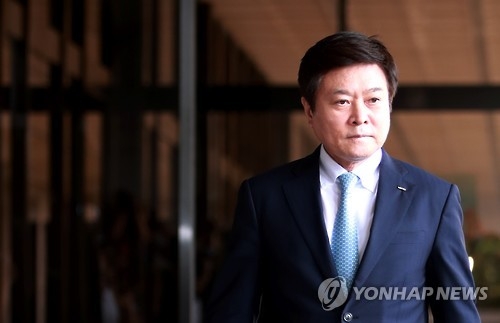