SEOUL, Sept. 5 (Yonhap) -- South Korea's parliamentary speaker on Monday said he "fully accepts" criticism made by ruling party lawmakers on his remark made on the deployment of a U.S. antimissile defense system, which resulted in the delay of an extra budget bill.

"There have been many criticisms from ruling party lawmakers on my opening speech (made last week)," National Assembly Speaker Chung Sye-kyun said. "I would like to say that I accept such remarks."

Chung, a six-term lawmaker, is from the main opposition Minjoo Party of Korea, which is opposed to the THAAD battery being stationed in South Korea.

Saenuri strongly objected to what it called a partisan remark, temporarily boycotting parliamentary proceedings, which affected the passage of the extra budget bill. The plan was finally passed late Friday.

"I would also like to express regret to the people for failing to handle issues that have close ties with the livelihoods of the people, such as the extra budget plan, as planned," the speaker added. 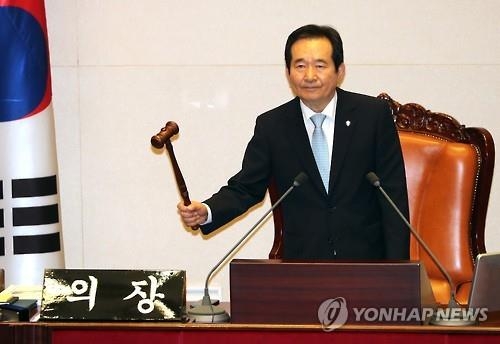