SEJONG, Sept. 5 (Yonhap) -- South Korea should strive to become a more developed country in the fields of culture, sports and tourism, all of which could help it overcome some of its economic challenges, the country's new culture minister said Monday.

"We need to overcome the current crisis by transforming the country into a cultural, sports and tourism power," Minister of Culture, Sports and Tourism Cho Yoon-sun said in her inaugural speech emailed to ministry officials.

This can provide a breakthrough in such national problems as sluggish exports, domestic consumption, youth unemployment and low growth of the economy, she said.

The minister also pledged to make full use of the PyeongChang 2018 Winter Olympics to enhance South Korea's national image.

Cho became the country's second female culture minister since Shin Nak-gyun served the post from March 1998 to May 1999 under the Kim Dae-jung administration.

Earlier in the day, Cho began her first day in office paying homage to those buried in the National Cemetery in Seoul.

"I'll do my best to make the country stronger and more beautiful and the people happier through cultural enrichment," she wrote on a visitors' note at the Seoul National Cemetery in southern Seoul. She was accompanied by senior officials from the ministry during the visit.

Cultural enrichment is one of President Park Geun-hye's top agenda items during her presidency, with the chief executive pushing for various policies to improve the nation's cultural infrastructure and the people's cultural welfare.

Cho then attended a regular parliamentary session after visiting the cemetery before traveling down to the government complex in Sejong, some 120 kilometers south of Seoul, to meet ministry officials. She opted not to have a separate inauguration ceremony.

Meanwhile, her predecessor Kim Jong-deok held a farewell ceremony in the complex with some 300 ministry officials attending. 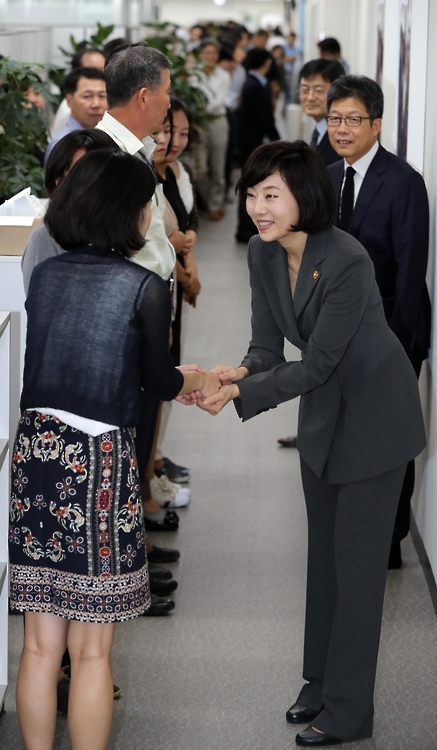