(Editor's note: This article is the 15th in our feature series on South Korea's lesser-known tourist spots.)
By Lee Haye-ah

SAMCHEOK, South Korea, Sept. 12 (Yonhap) -- In the eastern coastal city of Samcheok, nature and culture meet to create the perfect setting for a fun-filled, body-awakening getaway.

The city of some 70,000 people sits about a third of the way down South Korea's east coast, bordering the East Sea to the east and North Gyeongsang Province to the south. Nearby to the north, in the same province of Gangwon, is Sokcho, the mecca for vacationers headed east.

This summer, it may have been the exceptionally hot weather or the opening of a luxurious Greek-themed resort here, but whatever the reason, Samcheok was bustling with tourists. 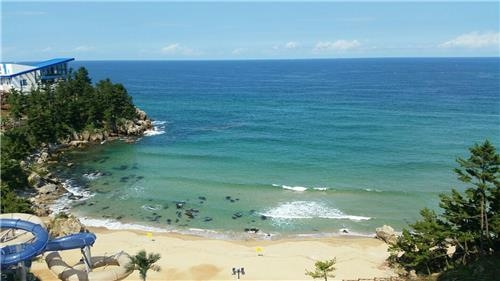 Locals will tell you the city is best seen in two parts: along the coast and inland to the west.

The coastline tour opens up the scenery and offers outdoor activities that both adults and children can enjoy. The inland tour, meanwhile, takes visitors deeper into the mountains and inside the caves Samcheok is famous for.

A good way to start is to take a drive along New Millennium Beach Road, which stretches 4.6 kilometers at the upper end of the coastline from Samcheok Beach to Samcheok Port. In 2007, the transport ministry chose the road as one of the 100 most beautiful roads in the country. A walk or a cycle is just as good if weather permits because there are separate lanes for pedestrians, bicycles and cars.

The winding road lines the edge of a cliff, and visitors on a sunny day will get a great view of the vast aquamarine sea and a whiff of the salt in the air. For many urban dwellers, this could be a welcome introduction to their new surroundings.

Along the way, travelers can make stops at a small sculpture park and the Tower of Hope, where people gather to watch the sunrise on New Year's Day.

Near the end of the journey, they can also pop into one of the many fish restaurants lining Samcheok Port for a taste of "gomchiguk," the dish that best represents the city.

"Gomchi" are moray eels, which are thrown into a soup (guk) with the traditional pickled cabbage dish kimchi, to create a hot and spicy stew. As the fish can't be stored frozen, the soup is only cooked with the day's catch, if there is any. This has earned gomchiguk a reputation of always being fresh and safe to eat. 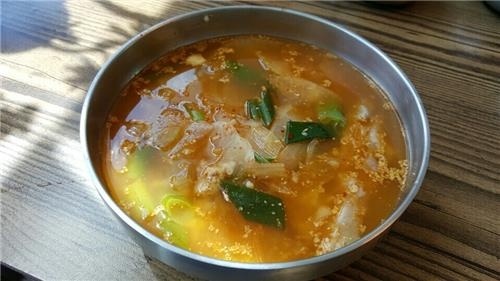 Farther down the coastline, a highlight of the tour can easily be said to be the Ocean Rail Bike -- a 5.4-kilometer-long ride in a comfortable four-wheeled rail bike that passengers pedal through pine forests and tunnels. Not only does the dual track ensure a splendid view of the sea in either direction, it immerses travelers in the scent of the pine trees.

Kimmy Chan, a tourist from Hong Kong, took the ride south from Gungchon Station to Yonghwa Station. She highly recommended the trip.

"It's very good. The caves, inside there are lights of different colors like fireworks!" she exclaimed, speaking to Yonhap News Agency after the ride.

"My daughter chose (Samcheok) because the journey has so many activities; (You can) have a ride or play in the water park," Chan said. 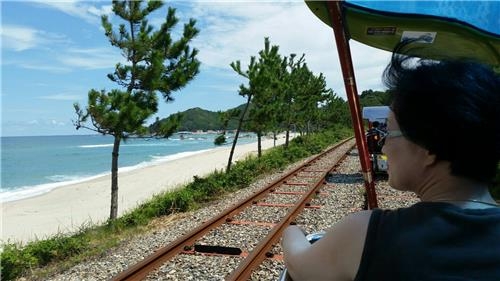 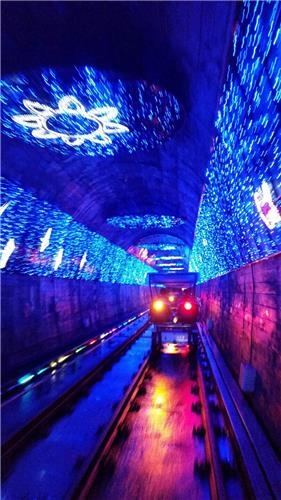 The rides depart every two hours, so if you're caught in between, a visit to the nearby Hwang Yeong-jo Memorial Park may be a good way to fill the time. A native of Samcheok, Hwang is a former marathon runner who won the gold medal at the 1992 Barcelona Olympics. The park houses a hall displaying various items and records related to Hwang and South Korea's marathon history. 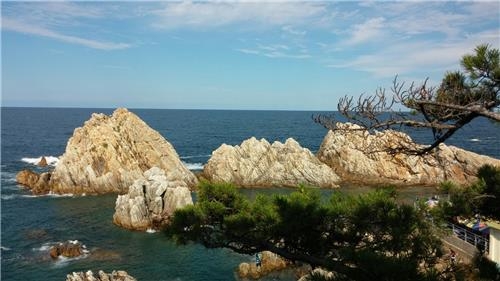 Many travelers to Samcheok will tell you they plan to visit Jangho Beach. The scenic area is found a short distance from Yonghwa Station. It has been dubbed the "Naples of Korea" because of its coastal line shaped like a half moon, but as with many such monikers, the meaning should probably not be taken literally.

Asked for her assessment of the site, one tour guide made an unsure face and said it has received mixed reviews. "Go see for yourself" was her advice.

Jangho Beach may not be Naples, but it could be worth a stop for young people and families. In a small, marked-off area of the bay, canoe rides and snorkeling sessions are on offer at what could be called a "tourist rate." For example, a 30-minute ride in a transparent, four-person canoe will cost you 44,000 won. 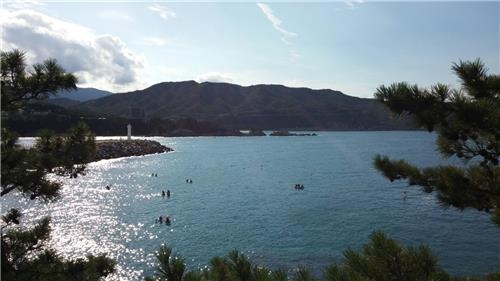 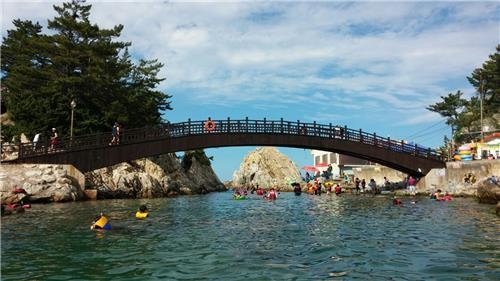 If that fails to impress, Haesindang Park, located farther south, is sure to grab your attention.

The park covers a 28,826-square-meter area overlooking the sea and boasts a creative display of phallus statues of all lengths and sizes.

According to legend, a virgin named Ae-rang and a bachelor named Deok-bae lived in what is now the area of the park. The two were engaged to marry, but before they could, Ae-rang died in a violent storm while gathering seaweed. After the tragic incident, no fish were caught in the sea. The villagers, believing it was due to Ae-rang's death, built a phallus statue and performed a rite to soothe her soul. Soon, the village began to have large catches.

Parts of the park may be unsuitable for children, with an "adults only" signpost marking the entrance to a model of "Deok-bae's house." 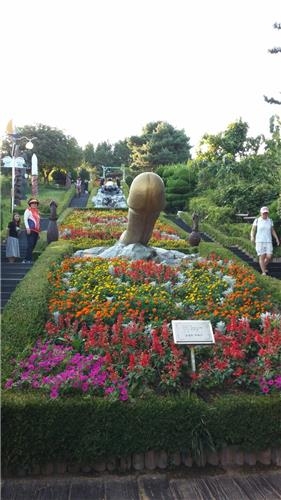 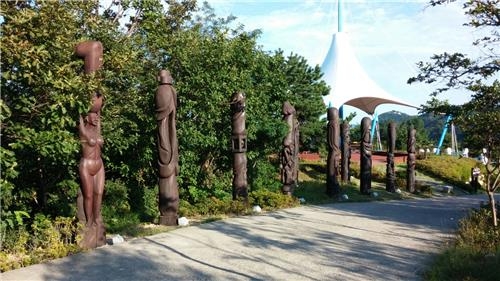 No tour of Samcheok is complete without a visit to its large, ancient caves. Part two, or the inland tour, can begin at Hwanseon Cave, which you can't miss if you keep going west from Gungchon Station until you nearly reach the first western border of the province.

Hwanseon is believed to be the largest limestone cave in South Korea, spanning a length of over 8 kilometers with a maximum width of 100 meters and a maximum height of 30 meters. It is estimated to have been created some 530 million years ago and has been designated natural monument No. 178.

Legend has it that a Buddhist monk entered the cave to meditate and was never to be seen again. People began to believe he had turned into a hermit and thus called him Hwanseon, which in Chinese characters means "unexpectedly transformed into a hermit."

It's possible to climb up to the entrance of the cave, but a monorail is available to take visitors there and back for a price of 7,000 won. The entrance ticket is an additional 4,500 won. 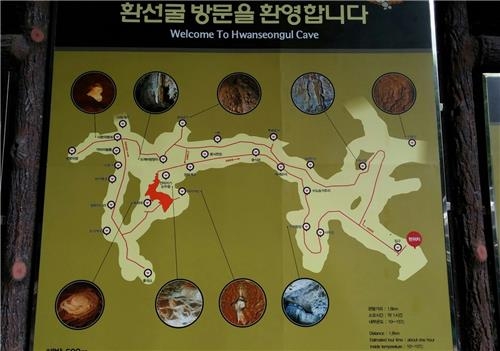 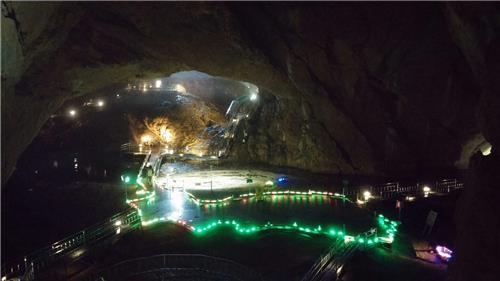 Walking into the cave, it was clear why the place had become a tourist hot spot this summer. First of all, the temperature dropped to 12 degrees Celsius, which was no small matter when the mercury rose to nearly 40 degrees in most other places in the country.

Secondly, the various cave formations, including stalagmites, stalactites and columns, are a wonder to see, especially under the lighting that highlighted their features.

Many of them have been given names such as "claw of demon" and "pledge of love," which help visitors imprint the shapes in their memory. 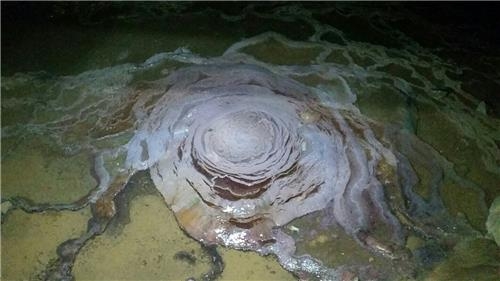 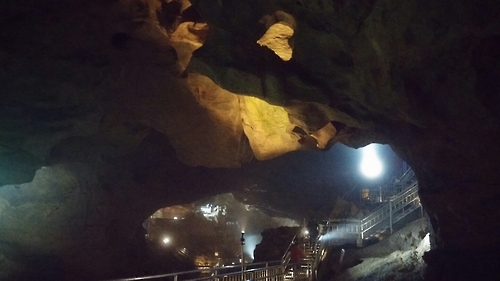 James Park, a 17-year-old student from the central city of Daejeon, said he felt like he was in a different world.

"It felt like the weather suddenly changed as the temperature changed," he told Yonhap News Agency after touring the cave with his family. "I could really feel the passing of time in the sedimentary landforms, in the flow of water and in the shaping of the rocks."

Lee Kou-jin, a 45-year-old businessman from Yongin, just south of Seoul, said he was impressed by the size of the cave because it was as big as others he'd seen in China.

"I think it's worth a visit, but it wasn't easy bringing my elderly parents along," he told Yonhap. "There are too few seats in the monorail cars, and it's quite a distance to the monorail stop."

Lee's parents couldn't finish the tour, which usually takes about an hour, so they took a shortcut out.

"The distance to that halfway point seemed quite long," Lee said. "It would be better if there were more segments."

On your way down from the cave, make sure to visit Golmal Shikdang, a small eatery selling traditional Korean food. Its "gondeurae bab," or rice mixed with a type of Korean thistle called "gondeurae," and buckwheat pancakes are not only tasty and chewy but also very filling. 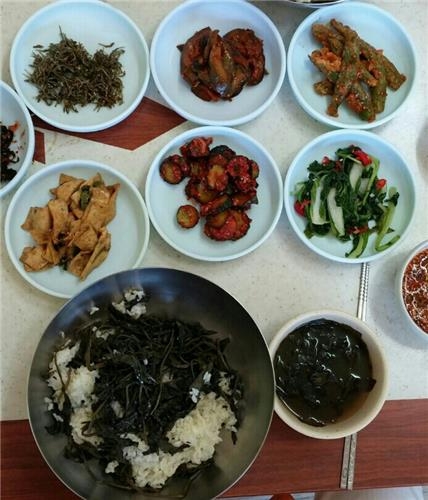 Summer may be over, but Samcheok appeals to tourists throughout the year.

"I personally think Samcheok is more suited for autumn and winter because its sandy beaches are long and therefore more emotionally stirring than other places," said Park Eun-kyoung, the editor of Cheongsachorong, a monthly travel magazine published by the Korea Tourism Organization. "It's a place where if you visit during quiet times, you can enjoy the solitude rather than deepen your loneliness."