"I feel obligated (to create more jobs), as the youth unemployment came to 9.2 percent in July, while many young South Koreans are feeling depressed due to the tough labor market conditions," Hwang said during his meeting with local youths.

The unemployment rate for young people, aged between 15 and 29, reached 9.2 percent in July, much higher than the 3.5 percent average for the country as a whole, according to government data.

Hwang said the government will expand ties among universities and companies to implement education and training programs that will give the youths more jobs opportunities.

The prime minister said he will also support small and-medium sized companies to improve their working conditions, as young job seekers tend to prefer conglomerates for better salary and welfare.

Seoul will also lend support to the growth of emerging industries such as the Internet of Things and virtual reality to create more opportunities, Hwang added.

"Companies should make aggressive investment into providing career opportunities to young people, and the youth should also make efforts to find work that reflects their own aptitudes and talents," Hwang added.

In a separate speech, Hwang stressed the government's efforts to ensure that jobseekers can get jobs based on their capabilities, not academic performance or background. 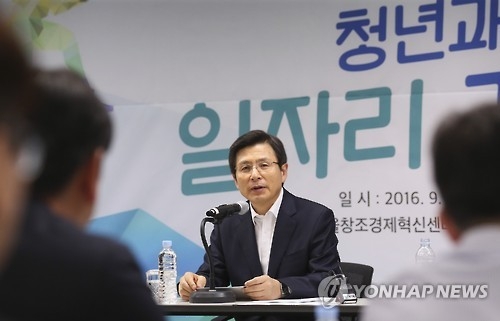