CHEONGJU, South Korea, Sept. 8 (Yonhap) -- An international martial arts competition drew to a conclusion Thursday as the organizers promised to deliver a better event next time by learning lessons from the first one.

The inaugural World Martial Arts Masterships wrapped up its weeklong journey in the city of Cheongju, some 130 kilometers south of Seoul. The event, hosted by North Chungcheong Province and the city of Cheongju, started on Sept. 2 with some 1,900 athletes and officials from 81 countries taking part in 17 events, including taekwondo, judo, kickboxing and kendo.

In addition to the start of the masterships, the 35-member World Martial Arts Masterships Committee (WMC) was also established to help manage the competition systemically and build the legitimacy of the event by cooperating with international organizations.

The WMC, also headed by Lee, said the second edition of the masterships will take place in North Chungcheong Province in 2019, and it will determine the host city later. Chungju, another North Chungcheong Province city some 60 km north of Cheongju, was originally considered to host the event next year but due to budget issues and lack of infrastructure, the WMC officials said the next masterships can be staged in both Chungju and Cheongju.

The third edition, which the organizers plan to stage overseas, will be in 2021.

"We don't know whether the next masterships will be hosted by Chungju or Cheongju or by both cities," Lee said. "But for the next edition, we will try to make the competition compact, staging events in three venues and possibly reducing the competition period to four days."

Lee admitted that the inaugural masterships didn't satisfy fans' expectations. He blamed the lack of budget for sloppy operations, as they started with only 8.1 billion won ($7.4 million).

The organizers originally planned to attract some 120,000 visitors, but only half of that number watched the martial arts events in the end although admissions were free. Soldiers from nearby military corps, elders from rural villages and even children from kindergartens were brought into gymnasiums to fill empty seats.

The organizers said some 200 athletes failed to show up due to visa problems and budget issues, and this forced the organizers to change the event schedule. In addition, eight athletes went missing during the competition. Police are still searching for the missing athletes who are apparently seeking to stay illegally in the country.

"We know there were many problems in our first hosting of the competition," Lee said. "We will fix the problems raised from this inaugural event and will make the next competition better." 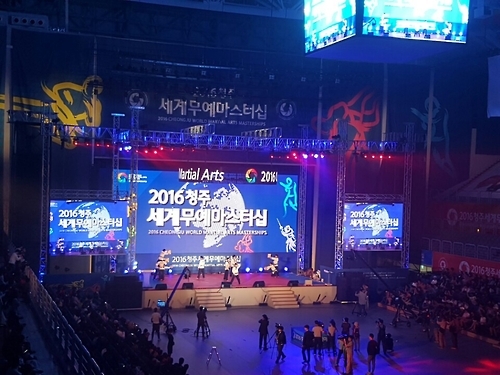