SEOUL, Sept. 5 (Yonhap) -- With a dearth of quality pitching, South Korea will be in for a tough battle at next year's World Baseball Classic (WBC), the team's manager said Monday.

"It's difficult to predict the results, but I have a feeling we'll be struggling," said Kim In-sik, named the WBC manager for the third time in four tournaments.

The 69-year-old guided South Korea to the semifinals at the first WBC in 2006 and to second place three years later. The veteran manager in the Korea Baseball Organization (KBO) has enjoyed international success elsewhere, having won the 2002 Asian Games gold and the inaugural Premier 12 last year.

South Korea couldn't make it out of the first round at the 2013 WBC, after losing to the Netherlands in the first preliminary game. The KBO returned to the trusted hands in hopes of recapturing the glory.

At his first press conference as the WBC boss, Kim said he will face an uphill battle just to put together a team. He has been the technical director for the KBO, a position that oversees the national team selection.

"I am mostly worried about pitching," he said. "And teams that will be contending for the Korean Series championship have most of the national team-caliber players, and I am concerned about potential injuries to those players."

In particular, Kim lamented the lack of right-handed pitching.

"It was the same issue at the Premier 12 last year," the manager added. "We just don't have enough of right-handed pitchers."

Kim said he may have to turn to Major League Baseball (MLB), and said Oh Seung-hwan, closer for the St. Louis Cardinals, is one of the early candidates on his mind.

"As the technical chief, I'd been thinking about selecting Oh," Kim said. "And as the manager, I am even more desperate for his help."

There's no doubting Oh's credentials. He is the KBO's career leader in saves with 277, and picked up 80 more in two seasons in Japan before signing with the Cards. He began the season as a setup man to closer Trevor Rosenthal, but replaced the ineffective former All-Star midseason and has recorded 15 saves so far.

He may be a controversial selection, however, because he has received a 72-game suspension from the KBO for his illegal gambling charges. The ban will kick in if Oh returns to the league here. 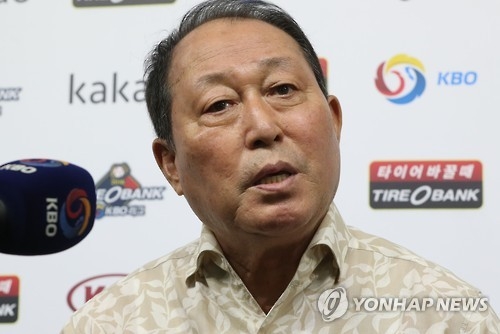 Kim said he's willing to put aside off-field issues "if the player wants to compete for the country."

South Korea has a handful of other major league players. Kim said he hasn't contacted any of them about the WBC, but Lee Dae-ho, first baseman for the Seattle Mariners, called to say he'd play as long as he is healthy. Park Byung-ho, designated hitter for the Minnesota Twins who recently suffered a season-ending hand injury, sent Kim a congratulatory text message after he was named the manager.

"With the big leaguers, we have to take into account their clubs' situations, too," Kim said.

Among the KBO players, Kim said he's keeping his eyes on Ryu Jae-kuk of the LG Twins, one-time big leaguer.

"Ryu has pitched a lot better than he was at the start of the season," Kim said. "Pitchers like that know how to work the hitters. They're better than young guys who just throw hard."

Kim said he has about 60 players on his list and the final roster will be whittled down to about 28.