CHEONGJU, South Korea, Sept. 8 (Yonhap) -- When the organizers of the World Martial Arts Masterships launched the competition, they announced their vision of becoming a "Martial Arts Olympics," and making South Korea, especially North Chungcheong Province, the global base of martial arts.

However, they learned that earning such a reputation is no easy task since the inaugural event was marred by a series of operational shortcomings and general lack of public interest.

The first edition of the World Martial Arts Masterships wrapped up after a week in the city of Cheongju, some 130 kilometers south of Seoul, in North Chungcheong Province. The competition started on Sept. 2 with some 1,900 athletes and officials from 81 countries taking part in 17 events, including taekwondo, judo, kickboxing and kendo.

South Korea easily topped the medal standings with 72 gold, 58 silver and 59 bronze medals since events like taekkyeon, hapkido, yongmudo and tong-il moo-do are not majorly played outside the country. Iran was in second place with 17 gold, nine silver and 11 bronze medals.

The second edition will be staged in North Chungcheong Province, with the exact host city to be determined later.

Those who watched the competition enjoyed the performances, but lamented that it could have been better.

"I'm watching this kind of event for the first time, but it's fun," said Lee Mi-seon who watched the wushu contests on Wednesday. "But it's a pity that we don’t see lots of people packing the stadium for this kind of event." 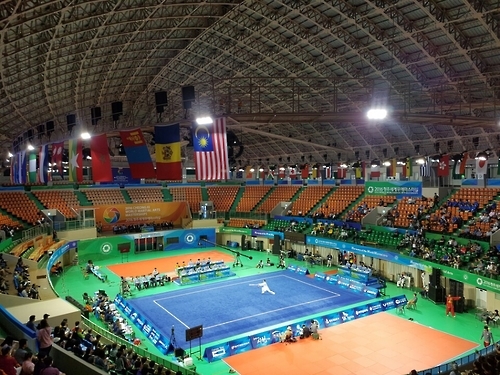 The masterships had a bumpy road even before it started.

The organizers first sought to host the competition in another North Chungcheong Province town, Chungju. The city, located 60km north of Cheongju, has a stronger tradition of martial arts since it is the birthplace of the World Martial Arts Union (WoMAU) which has 60 related organizations representing 40 countries. It is also the home base for the International Centre of Martial Arts for Youth Development and Engagement (ICM), an institute under the United Nations Educational, Scientific and Cultural Organization (UNESCO) that will be established in 2018.

However, after Chungju turned down the offer due to budget problems, Cheongju, the province’s capital, decided to step in and the organizing committee was given just 10 months to prepare.

Making it worse, the organizers, led by North Chungcheong Governor Lee Si-jong, started with only an 8.1 billion won (US$7.4 million) budget, which is just one-sixth that used for the World Combat Games, a similar multi-martial arts competition previously organized by SportAccord.

"You need at least four years of preparation to host this kind of event," said Heo Keon-sik, the head of the expert advisor commission within the mastership's organizing committee. "But it's a pity that we just didn't have enough time and budget."

Chief organizer Lee admitted they had little option with the small budget. Their first action was getting rid of promotion and public relations activities.

As a result, the competition was never broadcast through major networks in South Korea, although it was covered by a local internet protocol television (IPTV) service provider.

"Some sports officials are surprised that we staged the competition with this small a budget," Lee said on Thursday. "We know there are lots of problems, but please understand that this is our first step forward."

The organizers originally expected visitors to hit 120,000 over the seven days, but it brought in less than half that to the venues, even though admission was free. Soldiers from nearby military corps, senior citizens from rural villages and even children from kindergartens were brought into gymnasiums to fill empty seats.

"I personally like taekwondo and martial arts, so I knew about the competition," said Yeon Jae-ho, a 17-year-old high school student. "But my friends don't care about this event. I think they (organizers) should put more effort in promotion." 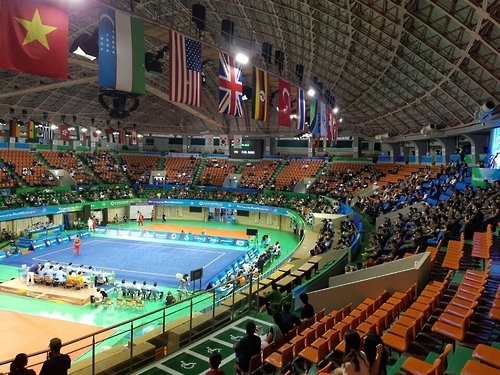 Athletes also lamented the masterships' lack of popularity. They hailed the efforts of the organizers to stage a martial arts event of this size, but said the competition needs more recognition.

"No one really knew about this competition in my country," said Matthew Thompson who came from the United States to compete in the martial arts demonstration event. "I think it deserves more media presence."

Chief organizer Lee said instead of attracting the public, they concentrated on inviting international martial arts heavyweights and federations, so such opinion leaders would know about the masterships.

"We thought that when these officials are impressed with our competition and return to their federations, it will help the development of the masterships in a healthy way," Lee said.

But this prompted less support for athletes. The organizers said some 200 athletes failed to show up due to visa problems and budget issues, which forced them to change the event schedule in the end.

The small budget also pushed the organizers to have fewer professional workers for the event. With less than 80 workers on the organizing committee, the competition showed problems in operation on and off the field.

During the competition, eight athletes went missing and police are still searching for them. They are apparently seeking to stay in the country illegally.

"What I personally really regret is that we couldn't deliver proper translation services to foreign athletes," said Ko Chan-sik, the secretary general of the organizing committee. "We had less than 30 translators, and we can't run them for 24 hours. I'm sorry for the foreign athletes."

The organizers said they will fix the problems from the inaugural competition and the next edition will be different. With the launch of the masterships, the 35-member World Martial Arts Masterships Committee (WMC) was also established to help systematically manage the competition and build the legitimacy of the event by cooperating with international organizations.

"People should know by now what the masterships are about," Ko said. "From the second edition, we will think about raising the quality of the competition, not the quantity."

The WMC, also headed by Lee, will first plan to secure a larger budget from the government. The inaugural competition did not receive official approval from the Ministry of Sport, Culture and Tourism as a nation-sponsored event, and therefore received only 900 million won. The organizers said they want at least 30 billion won.

They also hope to make a profit out of the competition in the future. For the first edition, the WMC and the organizing committee were not registered as legal entities so they couldn't pursue commercial activities, such as selling souvenirs and tickets.

"This is your event and you need to do some marketing," said Arceo Arnold, a Filipino martial arts practitioner who competed at the masterships. "They (organizers) can make this event better."