SEOUL, Sept. 5 (Yonhap) -- Scholars, former government officials and politicians on Monday voiced differing views on whether or not Seoul should pursue a nuclear armament strategy, amid the rising calls from hawkish lawmakers from the ruling Saenuri Party that the country must take all steps to protect itself from Pyongyang's growing threat.

The conflicting views came as North Korea conducted its fourth nuclear test early this year, while continuing to take military action, including the launch of a submarine-launched ballistic missile (SLBM) in late August and threats it will use its nuclear weapons to wipe out South Korea and the United States.

"Through our own nuclear armament, South Korea should deal once and for all with Pyongyang's nuke provocations while taking the lead in inter-Korea talks," said Cheong Seong-chang, a unification researcher at the Sejong Institute. He said the nuclear option made sense because other methods like dialogue and sanction have not been successful in the past.

Cheong also ruled out possibilities that Seoul's nuclear armament will lead to the rupture of the Seoul-Washington alliance.

"If South Korea develops its own nuke, it will become a direct threat to the North. Pyongyang will accordingly refrain from threatening the United States through long-range missiles, also making Washington safer," Cheong argued.

The North Korean expert said that South Korea is a global leader in nuclear power generation and has all the technology needed to make materials to produce a nuke stockpile that can easily dwarf the North.

Such remarks reflect growing public awareness that the country may have no choice but to acquire nuclear weapons in the face of evolving North Korean threats.

Reflecting this, South Korean politicians have also been debating the possibility of nuclear development. Rep. Won Yoo-chul, a five-term lawmaker of the ruling Saenuri Party, along with other hawkish lawmakers even kicked off a dedicated forum last month to expand debate on the issue.

Yoon Young-kwan, a former foreign minister, however, said at the gathering, that Seoul needs to be on guard against over blowing the issue.

He said expanding efforts to maintain close ties between South and North Koreans, rather than to just put the top priority on sanctions is something that needs to be explored.

National Assembly Speaker Chung Sye-kyun also maintained that the two Koreas should refrain from falling into extreme situations, adding sanctions should only work as a means, and not become an ultimate goal.

"South Korea should take the first step in solving problems through negotiations," Chung said. "We need to respond to the North Korean nuke issues, and take necessary steps to prevent the situation from getting out of hand." 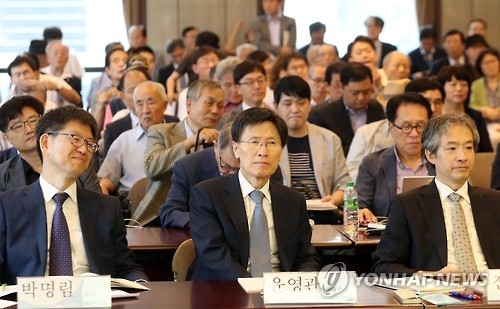