HANGZHOU, China, Sept. 5 (Yonhap) -- Cautious optimism is emerging for South Korea-China relations following a critical summit between its leaders Monday as the neighbors try to move beyond the strain caused by the planned deployment of a U.S. anti-missile system on the Korean Peninsula, analysts said.

On the sidelines of the Group of 20 leading economies in Hangzhou, eastern China, President Park Geun-hye and her Chinese counterpart Xi Jinping held talks as ties have been frayed by the Terminal High Altitude Area Defense (THAAD) deployment issue.

Though the summit reconfirmed their gaps over the THAAD deployment, it created fresh momentum to enhance mutual understanding and reverse the downward spiral in the two-way relations, foreign relations experts said.

"It is no exaggeration to say the THAAD issue has hampered and defined the bilateral relationship over the last two months," said Kim Youl-soo, a professor of international politics at Sungshin Women's University.

"But the summit set the mood for improvement in bilateral relations when both Seoul and Beijing do not want things to slip further into a quagmire." 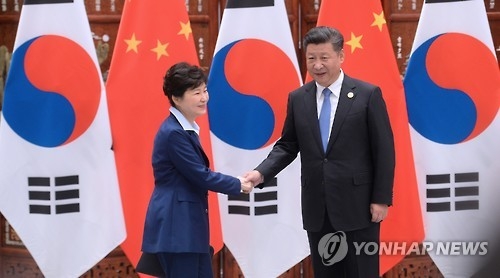 Since Seoul and Washington officially announced the THAAD deployment plan on July 8, Beijing has strenuously opposed it, arguing that it would needlessly escalate regional military tensions and hurt its security interests. The allies want the battery operational by late 2017 to counter evolving North Korean nuclear and missile threats.

During his summit with Park, Xi reiterated Beijing's opposition to THAAD, stressing that "mishandling the issue is not conducive to strategic stability in the region and could intensify disputes, according to China's state-run Xinhua News Agency.

But Park used the summit to stress the importance of continuing "strategic communication" between Seoul and Beijing to narrow differences over the THAAD issue, signaling her desire to patch things up with China.

In particular, Park's argument that the need for THAAD will dissipate if Pyongyang's nuclear and missile threats are eliminated helped strengthen Seoul's rationale that the missile defense shield only targets the North, observers said.

"In consideration of China's stance, Park apparently put forward the conditions for the withdrawal of the THAAD battery," said Nam Chang-hee, security expert at Inha University. "That was a good strategy to persuade Beijing over the need for THAAD, though that is not sufficient to satisfy the Chinese side," he added.

China's opposition to THAAD has been vehement as it has viewed the issue in a broader context of its strategic rivalry with the United States over regional military preponderance, experts pointed out.

The experts said that China is particularly concerned that a THAAD battery can complicate Beijing's so-called anti-access/area-denial (A2/AD) strategy, which is aimed at keeping any hostile forces -- namely U.S. troops -- at bay.

Over recent decades, China has been enhancing its A2/AD capabilities with cruise and ballistic missiles, bombers and other advanced weapons systems with longer operational ranges, and greater lethality and accuracy.

America's additional dispatch of a missile defense asset could weaken China's anti-access capabilities and tip the security balance in favor of its superpower rival.

The latest summit may possibly put the bilateral relationship on course to a thaw for the time being, but it still remains to be seen whether the positive mood will continue, analysts said.

"China is currently in the process of military reform, and the Chinese leader may feel the need to show (his strong leadership as the commander-in-chief) to the domestic audience," said Park Won-gon, a foreign policy professor at Handong Global University.

"There is still some time until the actual deployment of THAAD, and until then, tensions could flare up at any time," he added.

The THAAD issue has been a major setback to Park's efforts to restore trust with China -- South Korea's crucial partner for trade, tourism and the denuclearization of the North.

Since her inauguration in February 2013, Park sought to enhance the relationship with Beijing that worsened under the preceding Lee Myung-bak government that focused unduly on its treaty alliance with the U.S.

Amid repeated provocations by the North, including its 2010 torpedo attack on the South Korean warship Cheonan, Lee was forced to tighten Seoul's security cooperation with Washington.

Seoul's ties with Washington were strained under Lee's predecessor Roh Moo-hyun, who pursued a "more balanced, fairer" partnership with the U.S.

Monday's summit between Park and Xi was the eighth one between them, which highlighted frequent exchanges between the two leaders.

Park's policy attention to China had even triggered concerns that South Korea might be tilting too much toward China. These concerns were further amplified by her attendance at China's high-profile military parade in 2015 to mark the 70th anniversary of the end of World War II. 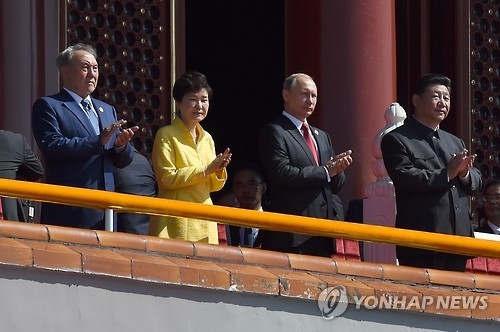 Much to her chagrin, the bilateral spat over THAAD has overshadowed her efforts to build trust with China, analysts said.

Professor Kim of Sungshin Women's University said that following Monday's summit, Seoul should continue its efforts to improve Beijing's understanding over the need for THAAD and remove any misconceptions about Seoul's intentions.

He also pointed out that Seoul should step up its public diplomacy toward Chinese people to curb the anti-South Korean sentiment that has been growing in the wake of the announcement to deploy the THAAD battery to the peninsula.