SEOUL, Sept. 5 (Yonhap) -- The state of mind of artist Jeon Hyun-sun is constantly evolving. Just like a painting from five years ago no longer has the same meaning as it did when she worked on it, she has grown and changed over the years, walking through the passage of life.

In her fifth solo exhibition "Nameless Mountain," Jeon depicts her confusing and ever-shifting emotional condition -- which is only natural for her young age at 27 -- in 40 watercolor paintings on display at Leehwaik Gallery in Seoul. Dark greenish-brown, abstract, and random, her paintings of mysterious ambiance, at first glance, seem to be cut out from an old Western picture book. She agreed. She did find it confusing, and sometimes even shocking, when she re-encountered some of the old stories that she had read or heard as a kid that contradicted the belief and expectation of her grown-up self. Naturally for her, she wanted to capture and reconstruct the perplexed condition of her mind through her art.

"In real life, you can't grab tentative, fleeting thoughts while in art, I can capture the moment of ambiguity in canvas," the 27-year-old artist said in a meeting with reporters on Monday. "I don't paint to express something I know for sure. I just express the emotional condition of the very moment when I paint, and leave interpretation or understanding open to anyone who watches it."

At center stage of her paintings, there used to be a circular cone.

"A cone is used as a metaphor for everything unfathomable. It started to appear frequently in my previous works to represent things that I found hard to understand," she said.

"As time went by and as I went through various experiences in life, however, it became bigger and bigger. Now it has grown as big as a mountain and achieved the permanent state that can't be possibly ignored."

Curator Kim Dong-hyun at the gallery explained: "For the artist, a cone or a nameless mountain, its extended version, seems to be the only companion in her lonesome quest for artistic advancement." 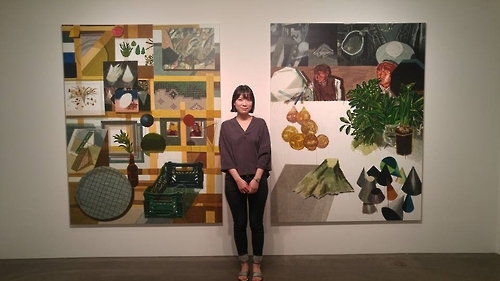 She majored painting at Ewha Womans University in Seoul and is currently in the middle of her masters' at the same school. On top of the five solo exhibitions, she has so far joined 15 group exhibitions, including the 2012 Asian Students and Young Artists Art Festival (ASYAAF) in Seoul. The author of "Thoughts that became paintings" published in 2015, she did the artist residency program of AM Planner in Berlin, Germany, in 2013.

"She has firmly established her unique artistic world in terms of materials and style, which is her strongest point as a young artist," Lee Hwa-ik, the director of the gallery said.

"Individually, each element (in the painting) is very detailed, but as a whole, they are ambiguous. Collided and completed, they defy definition," she said, adding "A painting allows me to leave ambiguous things as they are."

The exhibition opens this Wednesday and runs through Sept. 27. 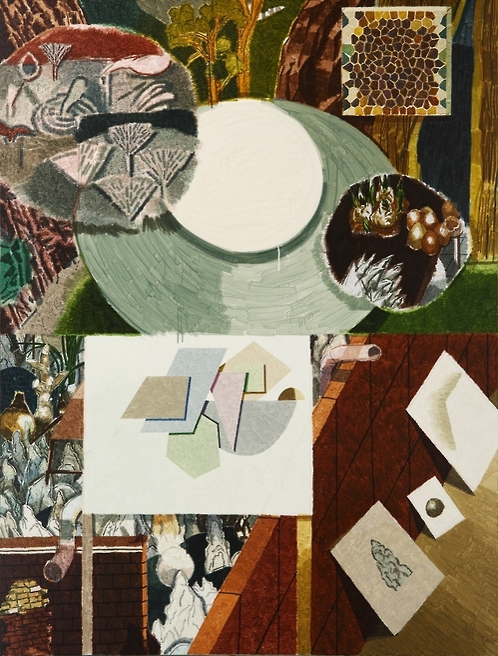