HANGZHOU, China, Sept. 5 (Yonhap) -- South Korea reaffirmed its status as a leading country in the world's structural reform efforts, Seoul's presidential office Cheong Wa Dae said Monday, as it announced the outcome of its participation in the summit of the Group of 20 (G-20) leading economies in Hangzhou, eastern China.

The two-day G-20 summit, which was held under the main theme, "Towards an Innovative, Invigorated, Interconnected and Inclusive World Economy," ended on Monday.

Citing data from the International Monetary Fund (IMF) and the Organization for Economic Cooperation and Development (OECD), Cheong Wa Dae stressed that South Korea has implemented 96 percent of its growth strategy, compared with the G-20 average of 55 percent.

Based on the progress, the IMF and OECD forecast that the gross domestic product of Asia's fourth largest economy will increase by additional 43 trillion won (US$38 billion) by 2018, the presidential office said.

"Our structural reform policy has been recognized by an exemplary case of the international community and (South Korea) reaffirmed its status as a first mover in terms of structural reform," Kang Seog-hoon, senior presidential secretary for economic affairs, told reporters. 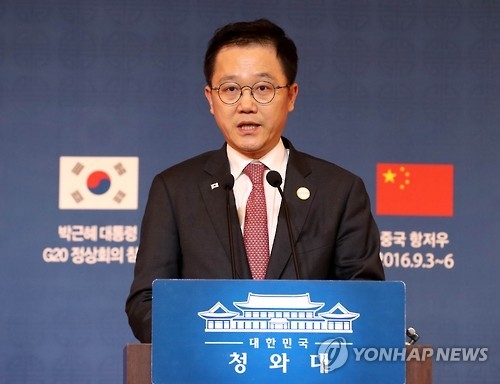 The presidential office, in particular, highlighted that Park's creative economy initiative has garnered particular attention at the G-20 summit as it centers on "inclusive, innovative" growth through a fusion of creative ideas and cutting-edge technologies.

Park's signature creative economy drive aims to boost the economy by creating new business opportunities, industries and jobs through the combination of new technologies, culture and other opportunities.

Cheong Wa Dae, in addition, pointed out that Park's efforts to promote open, free trade and forestall the recrudescence of protectionist tendencies have been reflected in the G-20 summit declaration and action plans.

The G-20 summit declaration said, "We reiterate our opposition to protectionism on trade and investment in all its forms."

The declaration also included the leaders' agreement to extend commitments to the "standstill and rollback of protectionist measures" until the end of 2018 and support the work of the World Trade Organization and other related agencies in monitoring protectionism.

Park's emphasis on the role of the Green Climate Fund (GCF) in combating climate change has also been reflected in the summit declaration. The GCF is a Seoul-based international agency to facilitate developing countries' adaptation to climate change.

The declaration said, "We reaffirm the importance of the support provided by the GCF."