The North's leader was present for the test-firing of ballistic rockets by artillery units of the Korean People's Army (KPA), according to the Korean Central News Agency (KCNA).

On Monday, North Korea test-fired three mid-range Rodong missiles toward Japan in an apparent show of force as the Group of 20 major economies summit meeting was held in China.

The launch also came four days before the 68th anniversary of the establishment of the North Korean regime.

The KCNA reported that Kim "stressed the need to continue making miraculous achievements in bolstering up the nuclear force" in its historic year that started with the country's test of a hydrogen bomb.

The artillery units of the KPA Strategic Force "demonstrated before the world their military might as a strong service capable of mounting a pre-emptive attack on the enemies any time and from any place," it reported.

It added that those units are tasked with striking U.S. military bases in the Pacific region in a contingency. 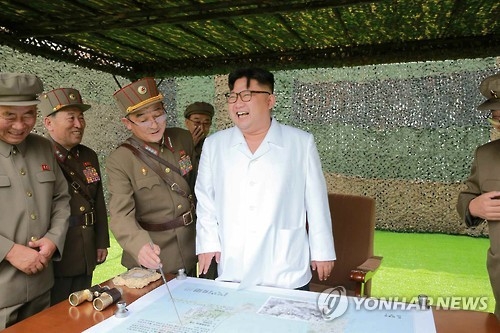 Since the North's leader took office in late 2011, North Korea has test-fired more than 30 ballistic missiles, including intermediate-range Musudan missiles, which theoretically can fly as far as the U.S. territory of Guam.

In late August, the North test-fired a submarine-launched ballistic missile (SLBM) that flew about 500 kilometers, the longest flight by such a missile launched by North Korea.

A South Korean government source said the North is presumed to have launched mid-range Rodong missiles with an improved warhead, citing analysis on photos carried by North Korea's Rodong Sinmun, the main newspaper.

The source said the missile's cone-shaped warhead is similar to that of a short-range Scud missile, but its flight path looks like that of the North's Rodong missile, which has a range of 1,300-1,500 kilometers.

North Korea is seeking to develop a nuclear-tipped intercontinental ballistic missile (ICBM) capable of hitting targets on the U.S. mainland.

Pyongyang has claimed technical advances of its missile capability, including its purported success of making a nuclear warhead small enough to be fit on a ballistic missile.

A Seoul government official said that the North would seek to conduct a nuclear warhead test and more test-fires of ballistic missiles on the leader's orders in March.

The UNSC slapped its toughest sanctions on Pyongyang in March over its fourth nuclear test in January and long-range rocket launch in the following month.

North Korea has claimed that its nuclear weapons development is an act of nuclear deterrence for self-defense in the face of what it claims is Washington's hostile policy toward Pyongyang.