HANGZHOU, China, Sept. 6 (Yonhap) -- President Park Geun-hye left for Laos on Tuesday to attend a series of summits with the leaders of the Association of Southeast Asian Nations (ASEAN), where she is expected to call for stronger international unity against North Korea's nuclear and missile programs.

Her four-day visit to the Laotian capital of Vientiane comes amid Pyongyang's continued provocations, including Monday's launch of three mid-range ballistic missiles. It is the third and last leg of her three-nation trip that also took her to Russia and China.

During these summits, Park is expected to highlight the seriousness of Pyongyang's evolving security threats and the need for tighter cooperation in pressuring the communist state into stopping its provocations and nuclear program, observers said.

On Tuesday afternoon, Park will hold a summit with U.S. President Barack Obama in Vientiane. She is also to hold talks with Japanese Prime Minister Shinzo Abe on Wednesday on the sidelines of the ASEAN-related summits, according to a source.

From Thursday, Park will begin her official visit to Laos, which was arranged on the invitation of Laotian President Bounnhang Vorachith.

On Friday, the leaders of South Korea and Laos plan to hold a summit to discuss trade, investment, development and other areas of mutual concern, Park's office Cheong Wa Dae said. It will mark the first summit between Park and the Laotian leader, who took office earlier this year.

During her stay in Laos, Park also plans to further deepen the bilateral partnership with the 10-member ASEAN, whose influence has been increasing since it launched the ASEAN Community late last year.

In recent years, Seoul has intensified efforts to build deeper, wider economic ties with the resource-rich bloc that boasts a huge market with the combined population of 632 million. ASEAN is South Korea's second-largest trade partner with two-way trade reaching US$119 billion last year. 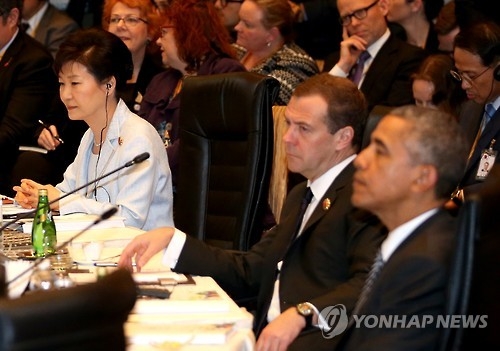