In an interview with Laos's English daily, Vientiane Times, Park also expressed her hope that her visit to Laos would help bring Seoul's cooperative relations with the Southeast Asian country to a "new level."

The interview was carried out before Park arrived in Vientiane to attend a series of ASEAN-related summits. Laos is the third and final leg of Park's eight-day trip that also took her to Russia and China.

"As global political and economic instability continues to increase, the AEC (ASEAN Economic Community) is expected to play an even greater role as a growth engine driving the East Asian economy and a leader in regional cooperation in East Asia," she said in the interview.

"Korea is making efforts to further advance relations with ASEAN by taking advantage of the momentum generated by the start of the AEC."

The AEC is part of the ASEAN Community, which was launched late last year.

The ASEAN Community, which consists of economic, socio-cultural and politico-security pillars, boasts a population of 630 million and US$2.5 trillion gross domestic product, not to mention rich natural resources and strategic locations linking the Indo-Pacific region.

"It is predicted that approximately 400 million people will form the middle class in this region by 2020, as a result of economic growth averaging more than 5 percent per annum," the president pointed out.

Pointing to a steady increase in trade and investment between South Korea and ASEAN, Park highlighted the need for greater trade liberalization between the two sides to increase the benefits of open, free trade.

"I think there is a need to further accelerate negotiations for the expansion and additional trade liberalization under the FTA and the Regional Comprehensive Economic Partnership (RCEP) negotiations. The RCEP is a mooted free trade deal involving 16 nations, including South Korea, China and Japan.

Ahead of her summit with Laotian President Bounnhang Vorachith, slated for Friday, Park expressed her expectations for expanded two-way cooperation in various areas, including trade and culture.

"I hope my visit will serve as a catalyst for elevating our friendly, cooperative ties to the next level so that we can get off to a meaningful start in building a common future," she said. 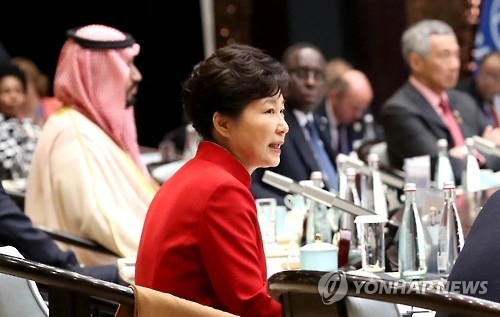