SEOUL, Sept. 6 (Yonhap) -- More than six out of every 10 people here oppose recent walkouts staged by unionized workers in the troubled shipbuilding sector, while more than 40 percent of people blame labor unions as a cause of the high youth jobless rate, a survey showed Tuesday.

In a poll conducted by the Federation of Korean Industries (FKI), 60.5 percent of respondents said they did not support the recent labor strikes in the shipbuilding sector, while 59.2 percent also expressed their opposition against labor strikes held against the introduction of a performance-based pay system 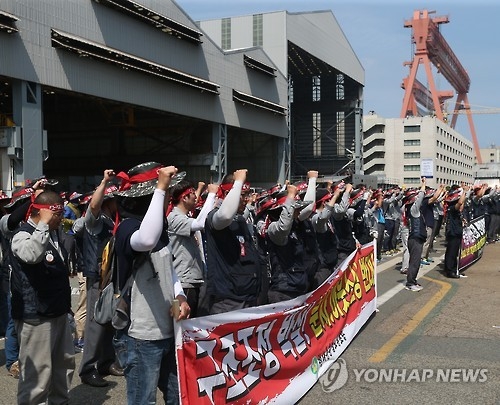 The employers' organization argued people's ill feelings toward labor strikes partly stemmed from their belief that unionized workers are only after looking out for their own interests.

For instance, 43.2 percent of those surveyed said labor unions and their efforts to protect their vested interests were partly responsible for the high unemployment rate of the young, compared with 23.7 percent who said labor unions had little to do with the youth jobless rate.

The survey was conducted on 700 people aged 19 years or older.

The unemployment rate for young people aged between 15 and 29 years came to 9.2 percent in July, down from 10.3 percent the previous month but still much higher than 3.5 percent for the entire workforce.

Those surveyed especially expressed their opposition against some labor unions and unionized workers who are allowed to pick their own successors in what is known as job inheritance.

When asked about problems caused by labor unions, 32.4 percent cited job inheritance as the most serious problem while 27.6 percent pointed to violent labor strikes.

"A majority of the people hold a negative view against massive labor strikes as the country's economy faces difficulties at home and abroad. Now is when labor unions must become more responsible and work to remove the large wage difference between regular and irregular workers and reduce the youth jobless rate, instead of only defending the interests of their members," the FKI said in a press release.

Majority of people do not support labor strikes: survey

Majority of people do not support labor strikes: survey