"The THAAD cannot protect the safety of the people from North Korea's missiles," the opposition head argued.

"It is also a diplomatic failure as it will induce China and Russia, necessary partners in our talks with Pyongyang, to turn their back away from us," Choo said, adding Park's security policies are "outdated."

Choo's remark is significant as the main opposition party had remained relatively neutral in comparison to other minor parties on the THAAD issue.

The main opposition also criticized the failure of the government to make enough efforts to revitalize the national economy that directly impacts the livelihood of the people.

"Operating profits of some local firms have hit bottom. Outlooks suggest the growth will reach 1-2 percent in 2020," Choo said.

"Shipbuilding, shipping, steel, and petrochemical industries, which have been standing as key sectors, are also facing challenges due to falling exports and sluggish domestic demand," Choo added.

Choo said the situation is attributable to Park as well as her predecessor Lee Myung-bak for not doing an effective job in propping up the economy. 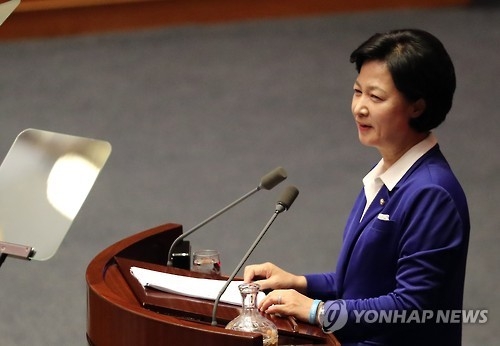