SEOUL, Sept. 6 (Yonhap) -- Seoul Mayor Park Won-soon on Tuesday said he is considering running in next year's presidential election, adding there must be a change in the regime in order to overcome the economic and security challenges.

"Next year's presidential race is very important. There must be a change in power," Park said during a meeting with the Korean-American community in New York.

When asked if Park plans to run for presidency, the mayor declined to give a direct answer but said he is deliberating on the matter.

Along with Moon Jae-in, who lost against incumbent President Park Geun-hye, the mayor is also considered to be a key potential candidate for the main opposition Minjoo Party of Korea.

"There must be a government that can take a look at the inter-Korean relations with a reasonable and open mind," Park said, adding Seoul should have been more cautious on the deployment of an advanced U.S. missile defense system in the country.

In a survey by Real Meter in late August, U.N. Secretary-General Ban Ki-moon stood as the leading presidential contender with 24.1 percent, trailed by Moon and Ahn Cheol-soo, former co-leader of the minority opposition People's Party, with 17.7 percent and 9.7 percent, respectively. Park held 6.3 percent. 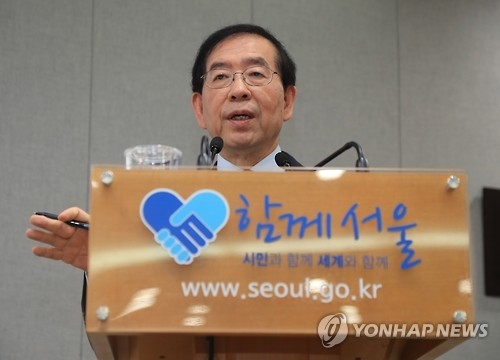