SEOUL, Sept. 6 (Yonhap) -- Sales of imported vehicles in South Korea dropped sharply from a year earlier in August, industry data showed Tuesday, following the government ban on sales of 80 Audi and Volkswagen vehicle models in the worst emissions scandal in the country's history.

According to the data compiled by the Korea Automobile Importers and Distributors Association (KAIDA), 15,932 imported cars were registered here in August, down 12.5 percent from the same month last year.

From a month earlier, the August tally marked a 1.3 percent increase.

The sharp on-year drop came as the government revoked the sales licenses of 80 vehicle models sold by Audi Volkswagen Korea, the local importer of the German cars, for fabricating their emissions and fuel efficiency test results.

In August, 476 Audi cars were newly registered here, down 83 percent from 2,796 in August 2015. Volkswagen suffered a 97.6 percent on-year plunge with only 76 cars registered here last month, the data showed.

With the sharp drop in sales of Audi and Volkswagen cars, the combined market share of German vehicles also slipped to 54.8 percent in August from 74.6 percent a year earlier, according to KAIDA.

Mercedes-Benz, on the other hand, continued to expand its market share, selling 4,835 cars, up 32 percent from the same month last year. BMW saw its market share shrink slightly from 20 percent to 19.13 percent over the cited period as its sales dropped 16.3 percent on-year to 3,047 cars in August.

In the first eight months of the year, the number of newly registered imported cars came to 148,411, down 6.5 percent from the same period last year. 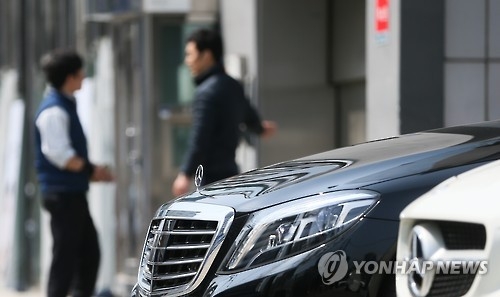