SEOUL, Sept. 6 (Yonhap) -- South Korean consumers who already bought the Galaxy Note 7 smartphones are expected to prefer to replace their Note 7 devices with new ones rather than receive complete refunds because of a longer period for the replacement program, industry officials said Tuesday.

Samsung announced a global recall of the Note 7 smartphones on Friday after some of their batteries caught fire while being charged. Mobile carriers in South Korea are also offering full refunds for the Note 7.

The refund program will be available until Sept. 19, but the replacement program is expected to last until March next year.

Even if the Note 7 owners contact a Samsung service center and find that their batteries are safe, they are likely to choose the replacement program because they simply want to use new Note 7 smartphones, said the officials. 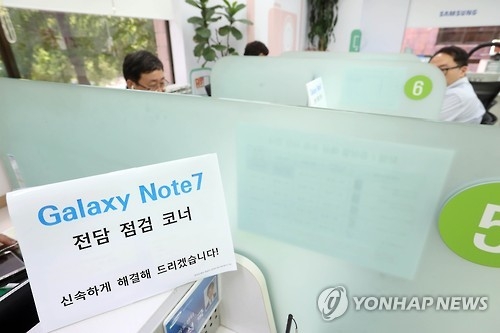 "It appears that customers don't need to rush out and swap their Note 7 smartphones for new ones because they have time for replacements," said an official in a smartphone industry.

Mobile carriers began their refund programs Saturday, but the number of Note 7 owners who applied for refunds was small, according to industry statistics.

"Some customers worried about their batteries returned the devices for a full refund, but such customers were few and far between," said another official at a mobile carrier.

Most Note 7 owners are believed to have preordered the devices, indicating that they may be loyal customers.

Out of about 400,000 Note 7 smartphones sold via preorder sales, about 100,000 are not believed to have been received because of a supply shortage.

Park Gang-ho, an analyst at Daishin Securities, said, "Typically, customers who have higher confidence and loyalty tend to buy smartphones via preorder sales.

"Given the brand power and functions, they are unlikely to find an alternative smartphone," Park said.
(END)