SEOUL, Sept. 6 (Yonhap) -- A new period drama about a prince falling in love with a woman disguised as a eunuch took the top spot on a TV popularity chart in its first week, data showed Tuesday.

"Love in the Moonlight," starring rising actors Park Bo-gum and Kim You-jung, scored 278.7 points on the Content Power Index (CPI) for the week of Aug. 22-28, during which its first two episodes went on air.

The SBS series is loosely based on the life of the Crown Prince Hyomyeong, who ruled the Joseon Dynasty (1392-1910) from 1827-1830 due to his father King Sunjo's poor health. In the drama, he falls in love with the fictional character Hong Ra-on (Kim), who serves in the royal courts after disguising herself as a eunuch. 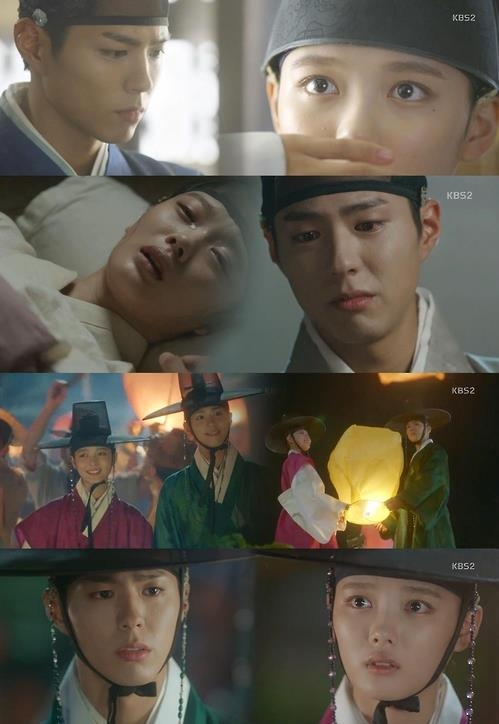 The index, developed by entertainment company CJ E&M and media ratings company Nielsen Korea, measures the popularity of TV shows based on the number of views of related news stories, keyword searches and mentions in social media.

In terms of viewership, the drama reached 20 percent in the capital area during its fifth episode Monday, according to Nielsen, a figure considered high in South Korea.

In third place was another newcomer, "Jealousy Incarnate," which revolves around the love triangle among a weathercaster (played by Gong Hyo-jin), an anchor (Jo Jung-suk) and a scion of a fashion conglomerate (Go Kyung-pyo).

The series scored 248.1 points, beating its rivals in the same time slot: "W" and "Uncontrollably Fond."

'Love in the Moonlight' tops TV chart in first week

'Love in the Moonlight' tops TV chart in first week