SEJONG, Sept. 6 (Yonhap) -- The mortality rate from car accidents inside tunnels is more than twice that for accidents on regular roads, but a large number of the tunnels do not have the legally required safety facilities, a report submitted to the parliament showed Tuesday.

There have been 2,957 cases of traffic accidents inside tunnels over the past five years, killing 150 people and injuring 6,753 others, according to the report submitted by the Ministry of Land, infrastructure and Transport to a parliamentary committee.

The death rate from such accidents was 5.07 percent, more than double the 2.25 percent for accidents on open roads.

By law, tunnels must have various safety facilities, depending on their length and the level of potential danger. Tunnels longer than 500 meters must have an escape route, for instance, while some are required to have broadcasting speakers installed to warn drivers of an accident ahead.

Also missing were emergency phone boxes, automatic fire detectors and entrance blockades, according to the report.

Rep. An Ho-young, a member of the parliamentary committee on transportation who had asked for the ministry data, said the chances of an accident turning into a bigger disaster is especially high inside tunnels because paths for escape are limited and drivers cannot see what's ahead. "It's a serious problem threatening people's safety that despite such likelihoods, appropriate anti-disaster facilities are missing." 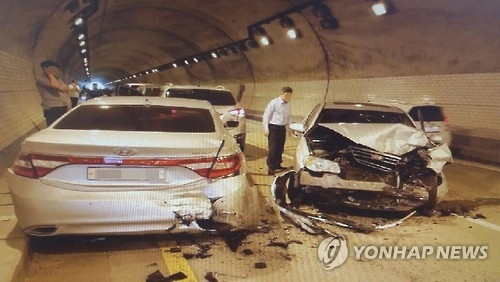