SEOUL, Sept. 6 (Yonhap) -- A former baseball pitcher banned for life four years ago for match-fixing issued an online apology Tuesday, saying he simply "wants to live like everyone else."

"I've had a lot of time for self-reflection over this," wrote Park Hyun-joon on his Facebook page. "I did an unforgivable thing, but I decided to write this message because I wanted to go on with my life. I won't ask for your forgiveness. I just want to go out in the world."

The 29-year-old received a suspended jail term and a fine of 7 million won (US$6,335) in 2012 on match-fixing charges, while pitching for the LG Twins in the Korea Baseball Organization (KBO). The right-hander with a side-arm delivery won a career-high 13 games in 2011. Once touted as a top pitching prospect, Park instead became the poster child for one of the league's worst off-field scandals.

The KBO banned him for life, and he also became ineligible to play in the United States, Japan and Taiwan, under the terms of the KBO's agreements with professional leagues in those countries.

"My life was in shambles; I was drinking every day, and I became suicidal," Park said. "I frittered away days until I got into the military. Then I wasn't sure what I would do afterward."

Park was free to pitch in the Dominican Republic, and even worked out for the Estrellas Orientales but decided to return home instead.

"I wanted to put on a baseball uniform and pitch one last time," he said. "It was like a dream to be training on a team. But I couldn't ask for anything more. That's why I came home again."

This was Park's first public message since the match-fixing scandal broke out. He said it took "a great deal of courage" for him to post the message.

"I had to be doing something with my life, but I could never get started because I was worried about how people would see me," Park said. "Then a friend told me that I've been punished enough and not being able to play baseball is a penalty in itself. Now, I want to go see a ballgame and walk the streets with more confidence." 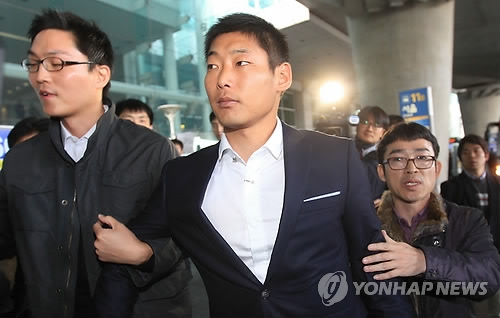