It was the day that Hong Soo-hwan claimed the World Boxing Association (WBA) super bantamweight title after beating Hector Carrasquilla in Panama City. Hong was floored four times in the second round against Carrasquilla, but he got right back up each time. In the third round, the South Korean finally knocked out the Panamanian with a left hook and claimed the world title.

For Carrasquilla, it's also a day he can't forget.

"I probably have watched the video clip of the match about one million times," Carrasquilla told Yonhap News Agency on Monday. "Whenever I watch it, I think the victory just slipped through my hands."

Carrasquilla is now in South Korea, not seeking revenge on Hong but observing the country's administration system as a Panamanian congressman. The 56-year-old is one of the 33 individuals invited by the Korea Foundation, a leading public diplomacy organization in Seoul.

During his visit, Carrasquilla will still meet Hong, who is now head of the Korea Boxing Commission (KBC), at a Seoul boxing gym Friday. This will be their first meeting since 1999, when they met each other through a local television show.

"We still respect and care about each other," he said. "In the bout, he won and I lost, but both of us are living well now. I'm proud that each of us is in the line of work to help our respective countries." 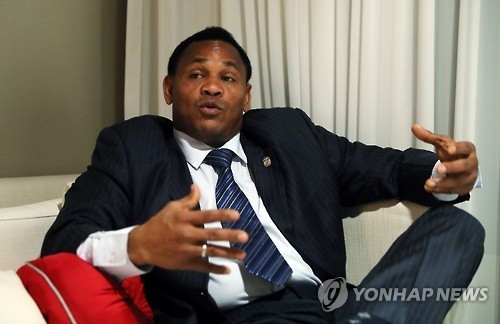 For Carrasquilla, the loss against Hong still remains a sad memory. However, at the same time, he said the defeat led him to pursue success in his political career. After announcing retirement from pro boxing in 1981, with a record of 18-5, he went on to become the mayor of San Miguelito and later representative for the district.

"It was a very sad moment for me then, but good things happened for me afterwards," Carrasquilla said. "After the defeat, I rearranged my life and entered politics. Consequently, I was able to get more wins in my life."

Hong's victory is considered one of the best bouts in South Korean boxing history, showings fans the greatness of a never-give-up mantra and encouraging people to believe in their potential. Carrasquilla knows he was the victim of the South Koreans' glorious moment and sought a revenge match against Hong.

"I wanted to fight him again, but it was difficult for me to control my weight," he said. "I had to move up a weight class (to featherweight), and that's why I had to give up on the revenge match."

Carrasquilla, one of the top Panamanian boxing prospects at the time, would have been the youngest world champion in super bantamweight class if he had beaten Hong. He had been 11-0, all victories by knockouts, prior to the championship fight.

Carrasquilla, however, said there is no regret in losing to Hong.

"I didn't become the youngest world champion, but I think I became a champion as a politician," he said. "Since I'm now getting support from Panamanian citizens like I received in the past, I have no regret."

Carrasquilla said the bout against Hong taught him a valuable lesson, instead. He added he is looking forward to meeting Hong.

"Even if you make a big mistake, I think it's important that you start over again and not feel devastated," he said. "I want to tell Hong that I was happy when he became the KBC president. I also want to hug him."

Under the KF's visiting program, Carrasquilla will visit the National Assembly, the Ministry of Foreign Affairs, the Korea Trade-Investment Promotion Agency and the Korea Institute for National Unification to understand South Korea's national system in politics, trade and unification. He will tour with politicians from 24 countries.

"I want to understand Korean culture and the way South Korea developed its economy," he said. "I can still remember what South Korea was like 38 years ago, but after I arrived at Incheon International Airport this time, I was amazed to find out that South Korea made a big progress in its economy." 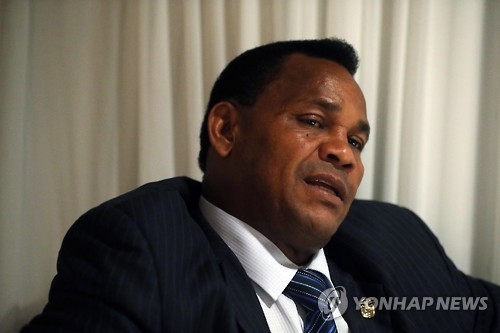