With only 13 ships in his command, Adm. Yi of the Joseon Dynasty (1392-1910) defeated 133 Japanese naval vessels led by the Toyotomy Hideyoshi in the famous Battle of Myeongnyang in 1597. 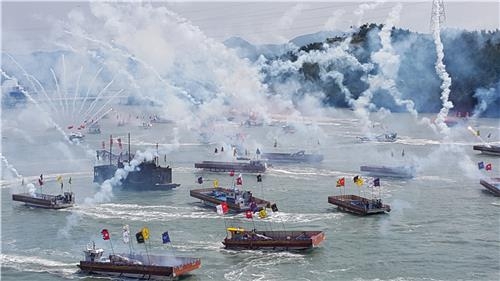 Since 2005, the two southern seaside towns of Haenam and Jindo have co-hosted an annual festival dedicated to the legendary war victory at the very site of the battle, which is known as Uldolmok or Myeongnyang. Every October, about 300,000 to 400,000 visitors from home and abroad flock to the festival to see the reenactment of the battle that took place more than 400 years ago.

This year, the fest ran from Friday to Sunday, as the organizer pushed up dates by a month due to the hectic fishing season. Despite an unfavorable weather forecast, visitors crowded Jindo Bridge -- a landmark that connects Haenam City and Jindo Island -- and six outdoor performance art stages. International tourists from different countries -- France, South Africa, the Czech Republic, Denmark and the United States -- were part of the crowd.

"My students have always tried to teach me about Adm. Yi Sun-sin," said Amber Gore, a 23-year-old English teacher from Pennsylvania, who enjoyed the festivities and mouthwatering food at the festival Saturday.

One of Gore's companions, Khoua Xiong from Minnesota, knew more about the legendary naval commander.

"I first got to know about Yi Sun-sin when I Googled Jindo before coming here to teach, and found out that Yi and Jindo dogs were the two most famous things in Jindo," she said. "I've also watched this film about Yi Sun-sin called 'Roaring Currents.' One of my favorite scenes was how he never let go of courage and won the sea battle with only 13 ships."

Talking about South Korea's by far most watched film, the hungry visitors disappeared to the other part of the festival venue, hunting for Korean noodles, deep-fried food and "haemool pajeon," or Korean traditional pancakes made of flour, green onions and seafood. Also frequently served in the food tents were boiled squid, fresh abalone and grilled shad -- an all-Korean fall specialty that appears in the famous Korean saying, "Even runaway daughters-in-law rush home at the smell of roasting shad." Rare dishes, such as whale meat and whole barbecued pork, drew the eyes of the passers-by as well. 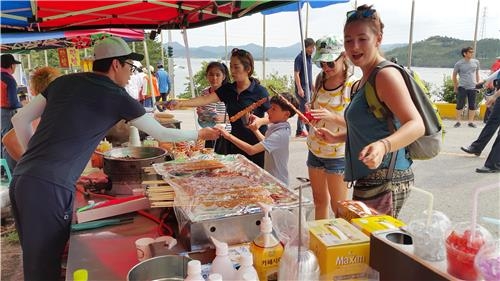 The festival staged a total of 13 events, such as a street play and an art auction, and 34 stage performances, including a Jindo dog show and traditional performing arts. On the sidelines of the festival were 21 hands-on experience events, such as hand fishing and straw shoemaking.

Yet the unchanging highlight of the feast was the reenactment of the Joseon-era naval battle. 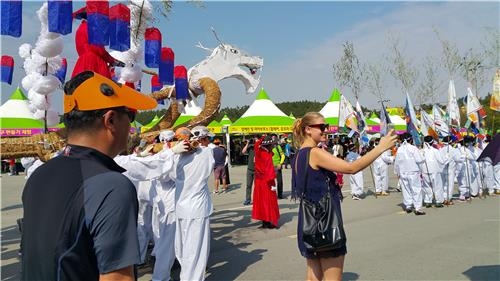 A total of 503 participants, mostly seamen and Navy officials, performed on 131 boats this year, dazzling the crowd with fireworks and other special effects. Caught up in the scenes of the battle and lively narrative from professional voice actors, the spectators held their breath and watched, holding tight to the railing of Jindo Bridge.

"I wanted to see something unusual that I cannot see in my country like this sea battle; It's something you can't see in the Czech Republic. I traveled 5 1/2 hours to see it, because it's worth seeing," said a 20-year-old Czech, who studies in Seoul and wished to remain unnamed. 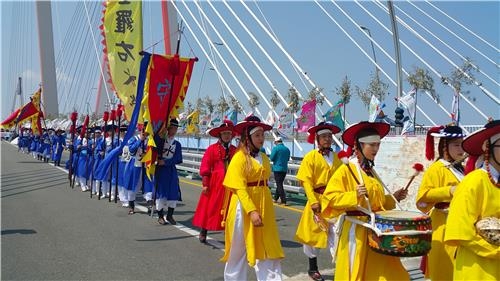 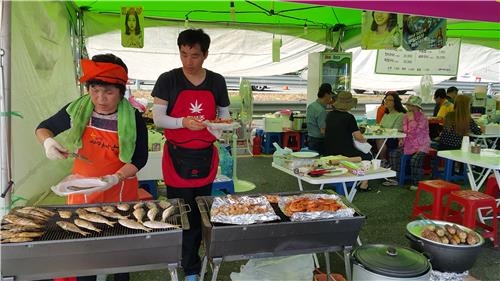 However, not all international visitors were able to see the 20-minute event. A group of international students, mostly on a free one-day tour funded by the Korean government, narrowly missed the performance. The organizer started the battle about 20 minutes ahead of schedule without making an official notice about the time change.

"It's a free tour so you can't ask for too much. Of course, we would have preferred to be on time to see the battle, because it looked really good. We only saw it from the bus," said a Danish student named Kim.

A public relations official for Haenam City said, "The weather reports showed chances of rain, so we had to adjust the time."

In addition, the Jindo Dog Show started several hours earlier than the original schedule without any prior warning, confusing spectators who came on time.

The international students also had difficulties figuring out information about the events, times and venues. Even the information tents did not have an English sign, making it difficult for foreigners to locate.

The three-day festival drew the curtains on Sunday, establishing itself as the largest event honoring Yi Sun-sin.

During the festival, some elderly Korean visitors were amused to find international visitors, eating and having fun just like the locals.

"This is my first visit to the Myeongnyang Festival, and I am surprised at its scale," said Seong Myung-hwan, a 66-year-old farmer from Goheung. "I want the festival to show the international visitors how much pride we Koreans have in Yi Sun-sin."

After watching a "ssitgim gut," or traditional shamanic ritual, Seong and his fellow villagers became so excited that they rushed to their tourist bus to get their traditional instruments and began an impromptu performance in a parking lot. The merry vibe spread quickly among the crowd, drawing strangers to dance and laugh together. 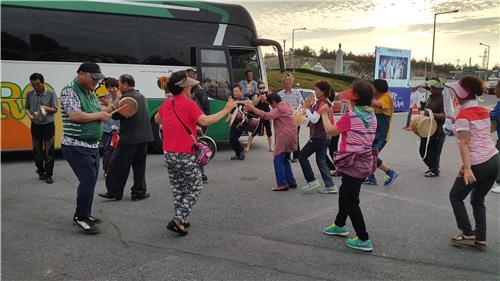 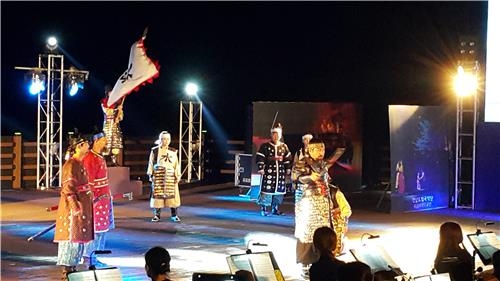 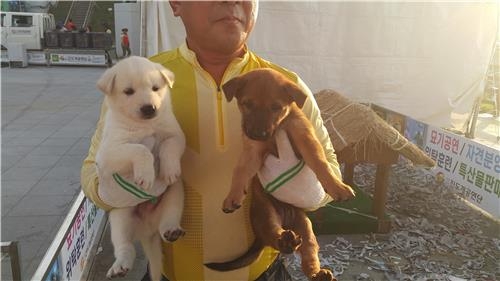