The festival announced its lineup Tuesday at a news conference presided over by BIFF executive director Kang Soo-youn in Busan.

The 21st edition of the festival will feature 301 feature and short films from 69 countries around the world, including 96 world premieres and 27 international premieres. The lineup is a bit slimmer than last year's 304 films from 75 countries.

"A Quiet Dream" by Zhang Lu, a Korean-Chinese filmmaker, humorously depicts the story of a young woman who supports her father suffering from total paralysis by running a small bar and three men around her.

It would become the first Korean film to headline the Busan film festival after "Always," a romance film by Song Il-gon in 2011. 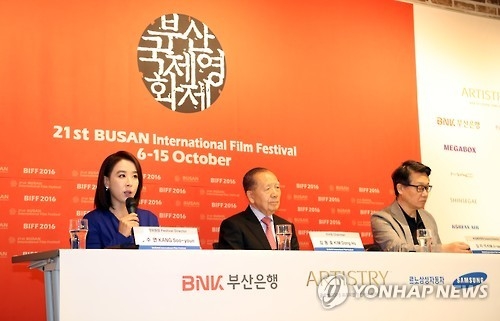 Iraqi director Hussein Hassan's "The Dark Wind" about the clash among pure love, traditional values and views of religion will close the festival, which runs on Oct. 6-15.

Four of the latest films from four contemporary master directors, including American director Ben Younger's biographical boxing film "Bleed for This," will be introduced in the Gala Presentation section.

Eleven films from 10 countries, including India's "A Million Colours" are up for competition in the "New Currents" section for up-and-coming Asian directors.

"We'll make it a film festival which ends two years of disharmony between the sponsoring city Busan and the film festival and opens the new 20 years before us," Kim Dong-ho, the festival chief said.

The festival authorities are scheduled to hold another news conference to announce the lineup later in the day in Seoul.
(END)