The festival announced its lineup Tuesday in two news conferences presided over by BIFF executive director Kang Soo-youn in Busan in the morning and Seoul in the afternoon.

The 21st edition of the festival will feature 301 feature and short films from 69 countries around the world, including 96 world premieres and 27 international premieres, according to the festival. The lineup is a bit slimmer than last year's 304 films from 75 countries. 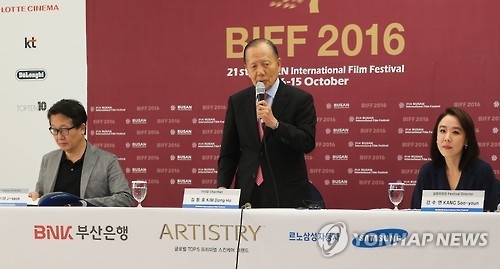 "A Quiet Dream" by Zhang Lu, a Korean-Chinese filmmaker, humorously depicts the story of a young woman who runs a bar and takes care of her unconscious, paralyzed father and the three men trying to woo her.

It would become the first Korean opening film of the Busan festival after "Always," a romance film by Song Il-gon in 2011.

Iraqi director Hussein Hassan's "The Dark Wind" about innocent love, traditional values and the collision of conflicting religious beliefs will close the festival, which runs Oct. 6-15.

Four of the latest films from four contemporary master directors, including American director Ben Younger's biographical boxing film "Bleed for This," will be introduced in the Gala Presentation section.

Eleven films from 10 countries, including India's "A Billion Colour Story" are up for competition in the "New Currents" section for up-and-coming Asian directors.

The film festival faced many perils ahead of the 21st edition.

Since 2014, BIFF and the Busan metropolitan government had been locked in conflict over "municipal interference" when then festival director Lee Yong-kwan pushed for the screening of a controversial documentary film in spite of opposition from Busan mayor and BIFF organizing committee chairman Suh Byung-soo. The city of Busan funds around half of the festival's annual budget.

BIFF claimed that the city's unprecedented audit into the festival organizers and drastic cut in funding were "political retaliation." Local film groups declared a boycott of this year's event, accusing the city government of interfering with their artistic freedom. 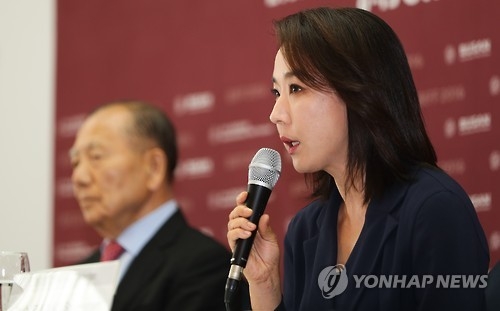 About half of the groups later lifted the boycott after Suh stepped down from the festival chairmanship and the two sides amended the festival rules to make it free from any political influence. In May, Kim Dong-ho, the festival's founding director, was named to fill the vacancy left by the Busan mayor.

"As a chairman, I feel sorry for causing trouble to the people and film industry at home and abroad over the past two years. I vow not to have this kind of thing happen again and express thanks, at the same time, to all those who supported the Busan film festival during that period," Kim said during the news conference at a Seoul hotel.

"We'll do our best to turn the past two years of conflict into blessings so the Busan film festival can revamp itself for another 20 years ahead," he said.

Defining the past two years of turmoil as "growing pains," Kang also pledged efforts to make it a better film festival.

"This year's festival will serve as an opportunity to find the path for the next 20 years," she said. "We'll redouble our efforts to make it a festival to lead the new currents of Asia and Korean films."