SEOUL, Sept. 6 (Yonhap) -- Company officials and union leaders at Renault Samsung Motors Co. have reached a tentative agreement on the wage increase for workers at the French automaker, the company said Tuesday.

The agreement came after five official rounds of negotiations and nine working group meetings since July 11, and marks the second consecutive year of strikeless wage deals, according to the South Korean unit of the French automaker Renault S.A. 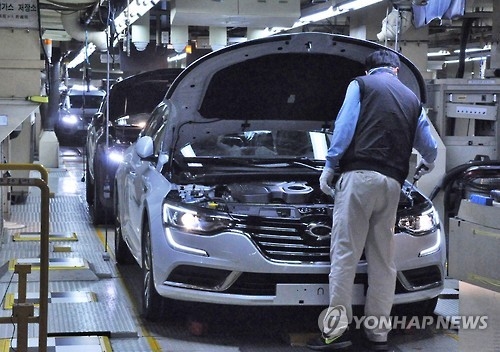 If the deal is approved, workers at Renault Samsung will add an additional 31,200 won (US$28.25) to their monthly salaries, while they will receive a lump sum payment of 4 million won each as a signing bonus and another 3 million won each to mark their successful launch of the new QM6 crossover SUV.

A vote by union members will be held for two days starting Wednesday.

"The deal is especially meaningful in that it has also established a culture of burden sharing by laborers when the company is facing difficulties and profit-sharing by the company when its performances are good," the company said in a press release. 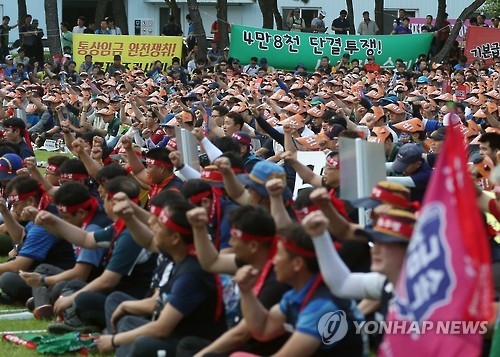 The management and labor union at Hyundai had reached a tentative deal after what company officials have called 14 devastating rounds of partial walkouts by unionized workers.

The union members, however, rejected the agreement that would have entitled each worker to various incentives said to be worth up to 18 million won.

They again held partial strikes on Monday and Tuesday, while company officials estimated their loss of output caused by 16 rounds of strikes so far at 83,600 cars, worth 1.85 trillion won.

The two sides at Hyundai are set to hold a fresh round of negotiations Wednesday.

Union leaders have said the key to an agreement is for the company to include what pleases union members in its offer.