According to the Office of Government Policy Coordination, the government is set to approve the new service, which grants users personal authentication using Near Field Communication (NFC)-tagged credit cards. Commercial service is expected to begin late this year. 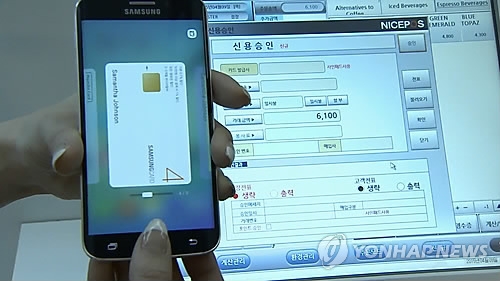 If users place their NFC-enabled credit cards on the back of their smartphones, the smartphones can read their personal information.

To avoid security concerns when a credit card is lost or stolen, a user must enter the first two digits of his or her card's pin.

Last week, the government notified the relevant firms, including Hankook NFC Co., of the process to get approval for the so-called "Credit Card NFC Personal Authentication System."

Cho Ki-man, general manager of Hankook NFC, said his company is likely to unveil the new authentication system in November or December this year.

At first stage, only users who have credit cards issued by South Korean firms can access the new authentication system.

Cho said his company is considering expanding the service to credit cards issued by foreign firms.

The process is seen as a major headache for foreigners living or studying in South Korea because they do not have Korean government-issued resident registration numbers, one of must-have items to provide personal authentication online.

Also, putting too much personal information online has raised concerns about information leaks.

In an attempt to alleviate such concerns, the Korean government created another authentication process called the "i-PIN (Internet Personal Identification Number), which has been questioned by critics over its credibility.

A hassle in personal authentication has long been cited as one of key obstacles against Korea's mobile industry.
(END)