Some 400 defense industry companies, including 80 multinational firms, will be on hand to hold talks with potential buyers at the Defense Expo Korea 2016, a biennial exhibition which will run Wednesday through Saturday at the KINTEX exhibition hall in Goyang, Gyeonggi Province, the ministry said in a statement.

Companies from such countries as the United States, Germany and Israel will set up booths at KINTEX to showcase their weaponry. Domestically, companies such as Hanwha Thales, LIG Nex1, Poongsan Corp. and Hyundai-Rotem Co. plan to attract buyers with their latest cutting edge armaments, he said. 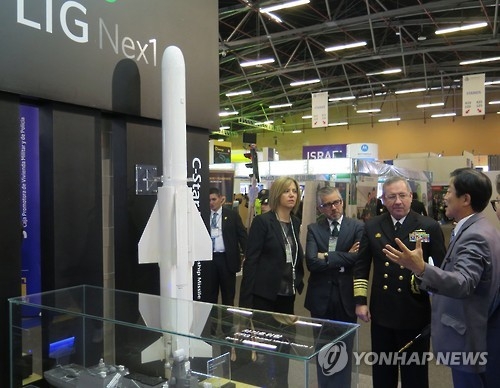 The defense ministry said businesses are not the only participants since military chiefs of staff and senior military officials have been invited to the exhibition from 35 countries, the statement said.

Ordinary visitors will be allowed to watch demonstrations of KIA1 and K-2 main battle tanks and to experience an armored vehicle in a separate outdoor exhibition hall from Sept. 7-9. On Sept. 10, they will be allowed to look around inside the exhibitions venue, it said.

The Association of the Republic of Korea Army (AROKA) hosted the first biennial event in 2014 with support from the defense ministry, the Army and the state defense procurement agency.