Underdogs in football tend to play lockdown defense and virtually neglect offense, hoping to settle for a draw at least.

Syria, ranked 105th, 57 spots below South Korea, might have lacked the offensive skills of their opponents, but it didn't stop them from mounting one counterattack after another at the flustered defense.

South Korea, as expected, dominated the possesion, but actually had fewer shots on target than Syria, by 4-2, according to the Asian Football Confederation (AFC) match data.

Syria spent the majority of the first half in their own zone, trying to keep the South Koreans at bay, but they didn't shy away from taking their chances. And for a stretch in the second half, Syria even outplayed South Korea.

Midfielder Mahmoud Al Mawas was especially dangerous. He took the first Syrian shot in the 19th minute, stunning the defense and goalkeeper Kim Seung-gyu with a thunderous mid-range shot.

On the other end, goalkeeper Ibrahim Alma made some strong stops, but could barely stay on his feet. After grabbing a loose ball for a completely innocuous save, Alma pulled off a rather acrobatic forward roll and stayed down for a few moments, drawing incredulous laughter from the South Korean bench.

What seemed to be genuine moments of pain for Alma increasingly became apparent as time-delaying tactics. After almost every save, Alma went down to the field, writhing in pain and calling for medical help.

And yet he would magically recover and bounce back on his feet. But it only took another shot in his general direction to get him down again.

Alma was visibly limping later in the match and couldn't even take goal kicks. Still, coach Ayman Hakeem refused to substitute for the injured custodian.

South Korean players grew more frustrated with each passing minute, as they were unable to create momentum owing to frequent delays.

Syria's time-killing antics may have gotten into the South Koreans' heads, but Stielike's players shouldn't have missed their opportunities and made themselves vulnerable to those tactics.

Defender Kim Young-gwon missed a couple of chances when he jumped in on the attack on set-pieces. Midfielder Koo Ja-cheol would have made life much easier for South Korea if his eighth-minute strike had gone into the net.

Ji Dong-won had another strong match as the featured striker. He kept the defense honest with effective movements away from the ball and created space for fellow attackers to exploit -- only that his efforts all went for naught.

When the match came to its merciful end, the Syrian players celebrated as though they'd just won the match. If nothing else, it was certainly a morale booster for the civil war-torn nation, forced to play "home" matches in neutral venues.

Syria and South Korea were at first scheduled to play in Lebanon and then Macau before settling on Malaysia. 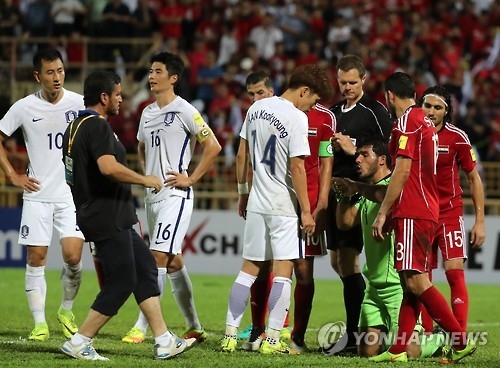