SEREMBAN, Malaysia, Sept. 6 (Yonhap) -- South Korea football coach Uli Stielike said Tuesday he is not satisfied with the scoreless draw with Syria in their World Cup qualifier, adding that his players were having difficulties dealing with the opponents' time-wasting tactics.

South Korea and Syria played to the 0-0 draw in the final Asian qualifying round for the 2018 FIFA World Cup. The match was played at Tuanku Abdul to Rahman Stadium in Seremban, Malaysia, since Syria cannot host World Cup qualifiers at home due to the ongoing civil war.

It was South Korea's first draw in the Asian qualifiers for the Russia World Cup. Stielike's side had eight straight wins in the second round and opened the final round with a 3-2 victory over China on Thursday.

"It's not a satisfactory result," Stielike said after the match. "Our goal was to collect a victory."

South Korea controlled the match with 65 percent ball possession, but they just couldn't get on the scoreboard. Stielike said the players performed well in both halves, but lamented that they couldn't convert the opportunities.

"Our players' passes were good," he said. "We tried to unlock Syria's defense till the 25th minute, but we failed to create opportunities and lost our pace."

Stielike said the players struggled against Syria's time-wasting mode in the second half. Syrian players were seen falling to the ground repeatedly and lying there for minutes to kill the time. The referee had to give six minutes of added time, but this wasn't enough for the South Koreans.

"Before this match, I told the players about the opponents' time-wasting football," he said. "Even if they waste 15 minutes, only six minutes of stoppage time is given to us and this is why teams like Syria are using time-killing actions."

Stielike said the Asian Football Confederation (AFC) needs to think about who should represent Asian football at the World Cup in the end.

"The AFC should think about whether teams that are aggressive and technically-talented or those that display 'anti-football' should go to the World Cup," he said.

However, Stielike said South Korea should have scored regardless of Syria's tactics.

"This is not a stage to make an excuse that we collected a draw because of the opponents' time-wasting tactics," he said. "In order to beat this kind of teams, we must have scored, but we didn't. And that's our fault." 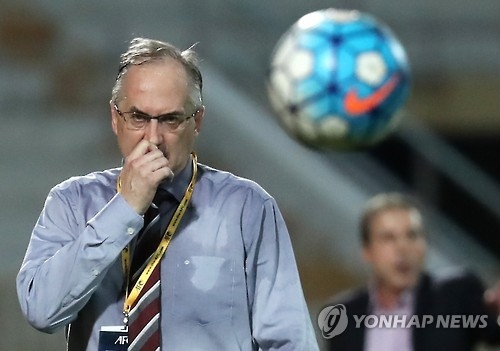