The three-way meeting in Manila took place on the sidelines of the 2016 Chiefs of Defense (CHOD) Conference, an annual gathering of top military officials in the region.

"The three leaders discussed the importance of trilateral cooperation and highlighted the success of the recent Pacific Dragon Exercise in Hawaii in July," the command said, referring to the first-ever joint missile-tracking exercise between the three countries.

The exercise was aimed at countering growing missile threats from North Korea.

The communist nation has been conducting a series of test-firings of ballistic missiles of all ranges -- short, medium, intermediate and submarine missiles -- since its fourth nuclear test in January and a long-range rocket launch the following month.

In the latest test on Monday, the North launched three Rodong medium-range missiles off its east coast. The missiles flew about 1,000 km and landed in waters some 400 km inside Japan's air defense identification zone, according to South Korea's military. 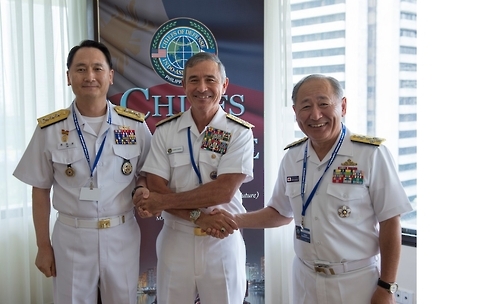